It's been five days since the election that utterly shocked most of our society. Wile I was hoping Trump would win the election, I was dismayed to see the Democrats lose the House. I've found my stance on this confuses a lot of people. I am not a Trump supporter (though, as I discussed in my last thread, I'm thoroughly impressed with his trolling ability.) However, a Trump win was necessary because our federal government was moving uncomfortably far to the left as evident by the complete disconnect from working class Americans. The manipulated defeat of Bernie Sanders in the Democratic primary perfectly illustrated the DNC cared only about pushing their golden child political elitist, and smugly assumed the party's historical base would enthusiastically support her.

By ignoring the will of the people, the party not only lost the election (and the Supreme Court seat and potential future seats), but lost the House, too. The result? We now have a president with no political experience, a shaky knowledge of most pertinent issues, and a questionable temperament. AND his party has control of both chambers of Congress, many of which owe him their seats.

I'm a liberal-leaning independent who prefers my government to be neutered by political balance. I voted for Johnson for strategic reasons related to the future, which I discussed in my last post. Most of my own political views are supported and advanced when the Democrats control the presidency and have the numbers to push policy through Congress. HOWEVER, I fully realize that situation heavily favors a relatively small segment of our population (city-dwelling college-educated white liberals and the dirt-poor) and is not supported by the religious right, rural America, or the working class. The farther policy veers to the left, the more those other groups are alienated.

Obama's last term worried me a bit. I saw more and more liberals in the news, online and among my real-life friends, pushing more and more extreme liberal ideals. While this delighted me on a personal level, it troubled me.

Our political climate in the U.S., at least in my lifetime and presumably throughout history, cycles between periods of conservatism and liberalism. The farther we venture in one direction, the more pronounced the swing in the other direction. That's not a bad thing. We're a representative republic, and this cycling assures we remain stable. Sure, it sucks when your team is losing, but we just need to ride out the storm and power is returned to our team.

Well, the problem is we ventured really far to the left. The farther we went, the worse the rebound would be. When this election cycle started, Trump was a complete joke. However, it was readily apparent both he and Bernie Sanders were tapping into some extreme repressed anger that had been ignored by both the Democratic and Republican leadership. As the primaries wore on, it became apparent this was going to be a... different... election. The people who had long been ignored were making some noise. Serious noise.

As an independent, I don't feel a particular allegiance to any given party. I tend to vote for my own self-interest, then the interest of the entirety of the masses (and not just for those who support my own world view.) Given campaign rhetoric ventures into hyperbole, I usually read between the lines to determine just how any given candidate will personally affect me. It didn't take long to conclude none of the candidates would affect my personal life in a significant way, so I considered which candidate would provide the most societal stability with the least damage. I concluded either Bernie with a GOP-controlled Senate or Trump with a Democratic-controlled House would be the best bet, mostly because both spoke to the disenfranchised segments of our population the political elite had ignored for decades.

Bernie's socialism ideas were stupid, but his charisma could unite people. And I liked most of his platform that didn't involve economic policy. He was my #1 pick, but the rigged Democratic primary killed his run. Sidebar - shame on you, Democrats. Where was the outrage when your party leadership scammed you? Anyway, that left Trump. I didn't buy into some of his batshit crazy rhetoric, which I immediately recognized as trolling to further create a divide between the pretentious liberal elite (who Hillary perfectly represents) and the working class Reagan Democrats. I wasn't going to overtly support Trump, but he was most likely going to get my vote because a) he would give a voice to the working class and rural America, and b) any of his batshit crazy ideas would be killed by a Democrat-controlled House.

Then we hit summer. And liberals started ramping up the stereotyping all Trump supporters as racist, sexist, homophobic "deplorables."

Since I left my small town, went to college, and got a white collar job, I was exposed to (and adopted) a lot of liberal ideals. I went through a period in my early 20's where I was about as obnoxious of a social justice warrior as one could imagine.

Real life has a way of tempering that, however. First, being a public high school teacher exposed me to a representative sample of the population, including the dirt-poor, the working class, farmers, while collar professionals, and the rich. I came to realize my internalized liberal ideals would never be adopted by the majority of Americans because it simply violated too many of their fundamental beliefs. Eventually I started taking a more moderate approach and became more concerned about developing compromise between the left and the right. It turned out to be relatively easy to sell my liberal ideas to conservative friends, and my conservative ideas like gun rights to my liberal friends if I took the time to understand them.

That perspective led me to post this in July: 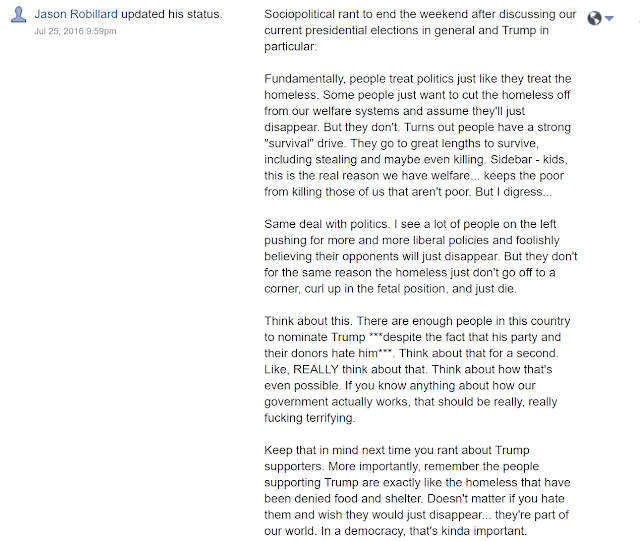 I spent the rest of the election cycle imploring my liberal friends to take the time to actually befriend some Trump supporters in the hopes they'd stop the stereotyping.

Most ignored the pleas. Some debated based on the rationale that they "knew what Trump supporters were really like, so don't try to convince them otherwise." A few even defriended me.

And now we have Trump as president and the GOP controls Congress.

Worse, I see my liberal friends continuing to frame Trump supporters as horrible people instead of pausing, reflecting, assessing what went wrong, and reformulating a new strategy. This video sums up the sentiment nicely:

So where do we go from here? Liberals in general and Democrats in particular need to take steps to change course. This is what I would recommend:

Will any of this happen? I seriously doubt it. I have a few friends (who unsurprisingly supported Bernie) who are actually getting to work on changing their local political party activity to better reach the working class, but the vast majority just keep their heads up their asses. I cannot count the number of times I've heard liberal friends continuing to vilify those who voted for Trump. They seemingly have no idea that most Americans think differently than them. They smugly believe they have all the answers, presumably because they live in a completely isolated bubble. If that doesn't change, we're in for a very, very long GOP rein.

Liberal friends, instead of expressing fear or outrage, instead of signing Internet petitions to scrap the electoral college, instead of holding silly protests, take some time to reflect on how YOUR actions may have contributed to ordinary Americans making the decision to vote for Donald Trump. If you support any of the ideas I listed above, strongly consider if that's really a logical stance to take. When considering the folks who may have voted for Trump, use a little empathy and some of that "open-mindedness" liberals are always claiming to possess. Think about how you'd feel if the roles were reversed. Think about what message would sell liberal Democratic ideas to a person who may have supported Trump.

Once you do that, identify five Trump supporters in your life. Go charm them. Sell your ideas to them. Don't call them stupid, racist, sexist, homophobic, Nazis, or any of the other bullshit we've all seen. Be a nice, decent human being.

THIS is how we can right this ship.

Otherwise, we're in for a very long, painful eight years.