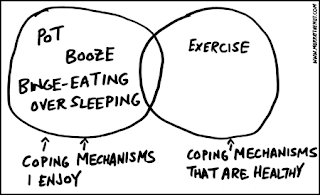 In the first post in the series, I talked about my experiences with high functioning depression. In the second post, I talked about the process I use to identify the triggers for depressive episodes. In this post, I'll talk about the steps I take when a depressive episode sets in. When this happens, my goal is to make the episode as short as possible and as mild as possible. Before I get into those specifics, I'll talk about why the episodes occur in the first place.

This whole depression thing is tricky because, despite our advances in understanding the human brain, we're still not entirely sure why we develop depression. There are a lot of hypotheses, and we have some decent hints that suggest it's a neurotransmitter imbalance issue. But we don't fully understand the connection between environment, behaviors, emotional states, and brain functioning. The best we can do is make educated guesses.

Specific to the trigger discussion from the last post, I can make a reasonable assumption that all of those triggers somehow influence brain chemistry in general and serotonin and dopamine in particular. Simply avoiding the triggers doesn't always work because there may be unknown triggers that also influence brain chemistry. Or sometimes the triggers are unavoidable. For example, we've had an unusually rainy winter so far in San Diego, which means we've had excessive cloudiness. Not surprisingly, I've had one of the more persistent depressive episodes I've had in years.

Since avoiding the triggers isn't 100% reliable, I also developed coping mechanisms. As I mentioned, the goals of the coping mechanisms is to make the depressive episodes shorter, less intense, and hopefully less frequent.

I like to use a mental image to help process how the depressive episodes affect me. My preferred visual are buckets filled with "motivation." Here's normal: 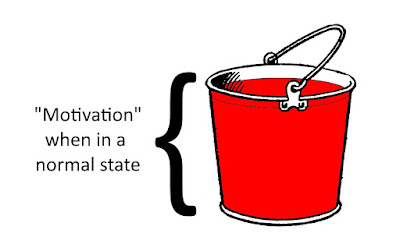 The bucket is full. Anything and everything I do takes a few teaspoons from the bucket, so the level of motivation drops throughout the day. The less "motivation" there is in the bucket, the harder it gets to get it out and the more I have to take out for everything I do. This is never an issue, though, as the bucket's full. Even on the busiest, most stressful days, I will never run out. The next day, the bucket refills. Lather, rinse, repeat. 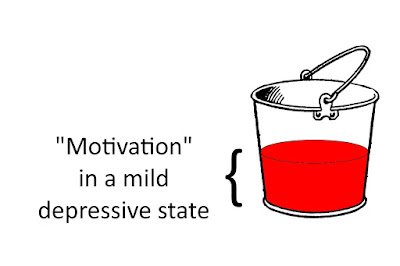 There's less "motivation" in the bucket. When I have to do something, it's more difficult to get that motivation out of the bucket. Instead of needing a few teaspoons, everything I do might require several tablespoons... maybe even a cup. In this scenario, I have plenty of motivation for the shit I need to do, like take care of my personal hygiene, take care of the kids, be a good husband, and fulfill my work obligations. But there's not a lot left over for anything else. Because of this, I get selective about what commitments I make to others, projects I initiate, or other obligations I might otherwise take on. In short, I'm actively conserving my motivation.

In the off chance I do exhaust the motivation in the bucket, I go into a "motivation deficit" state and start experiencing anxiety coupled with irritability, which also causes reduced cognitive ability and, strangely, a decrease in fine motor skills. The greater the deficit, the greater the anxiety,  irritability, and cognitive function. And I get clumsier. While it's unlikely in these minor depressive states, I will get to the point where I simply cannot function in a meaningful way. Generally speaking, the greater the deficit on any given day, the less "motivation" will get refilled for the next day. 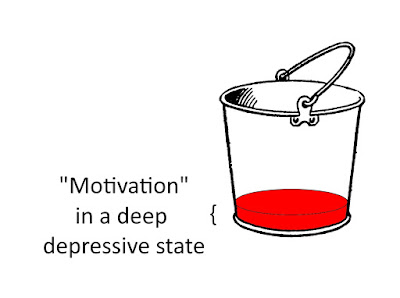 In this state, there's not enough "motivation" to do all the shit I need to do on a daily basis. That requires me to get militant about obligations. I simply can't afford to waste what little motivation I can muster on shit that isn't critically-important. Everything else gets put off until the episode ends. When I'm going through this, I get extremely reclusive and I'm incredibly irritable. I'm not pleasant to be around.

In the unlikely event something comes up where I absolutely have to do shit beyond the bare minimum for survival, I'll go into the same aforementioned anxious state and keep going for hours or even days. But it comes at a very heavy price.

The best example of this is when my father died unexpectedly about a decade ago. The grief was crushing and immediately plunged me into one of the deepest, darkest depressive episodes of my life. Unfortunately, many people looked to me to be their rock. Not only did I start every day with an empty bucket, but I had to hide the crushing anxiety and irritability. I did... kinda... for about three days. The shit all collapsed one morning when I woke up to an excruciating pain in my abdomen, followed closely by a panic attack. It was the first time that had ever happened. I needed to retreat to solitude immediately, and it took days for the panic attacks to subside.

At the time, I didn't have well-developed coping mechanisms. That experience gave me all the motivation I needed because dealing with the depression and anxiety made a shitty situation infinitely worse. And it taught me to avoid others who are grieving. More significantly, it led me to systematically developing the coping mechanisms that would help me survive the depressive episodes, allow me to do the shit I need to do with minimal negative effects, and, in some cases, shorten the depressive episode. 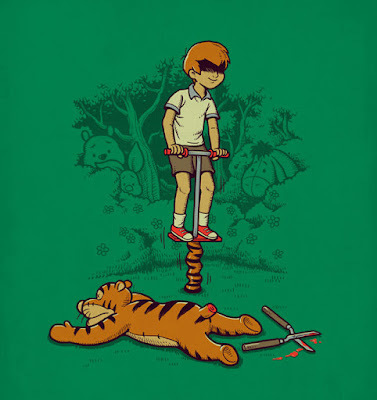 These are among the most common coping mechanisms I use once depressive episodes take root. None are magical cure-alls, but they do help me manage the episodes and shorten the duration. It changes the scenario from "Shit, I can't do anything to fix this" to "okay, I can handle this." That shift in the locus of control goes a long way towards making this a minor annoyance versus a major life-disruption. As I've said in a previous post, coupling this methodology with identifying and avoiding triggers has resulted in a reduction of depressive episodes from about 50% of the time to about 10-20% of the time.

In the next post, I'll discuss the unlikely benefits of high functioning depression. I like to think we're all deal a hand in life, and we can't change the cards. Some people have better hands than others. If we're dealt a less-than-perfect hand, we could bitch and complain about our bad luck... maybe play the victim role. God knows we have a lot of that bullshit in our modern world.

Me? I'd much rather learn to play the hand I'm dealt in the best way possible. I want to learn the rules of the game, learn how others play the game, then use my hand to play the best damn game I can. I didn't always embrace this idea, and the difference between that period and today are night and day.