Bringing the World Together Via the Tribal Organization Hypothesis

I have a dirty secret to share. I'm a dirty hippie liberal. People that don't know me in real life and only know me via blogs or social media usually assume I'm a schizophrenic, narcissistic, douchey, white male conservative. Turns out only three of those are mostly true.

The point? I'm interested in bringing the world together. Building bridges. Making connections. Curing world hunger and assuring peace and prosperity for all.

Anyway, the major roadblock I've found to this is our tendency to really, really dislike each other. And we're all guilty. It's easy to point out the KKK, Westboro Church, ISIS, and fans of "The View" as bigoted fucks, but we sometimes fail to realize those Bernie Sanders supporters that go on and on about their seething hatred for Donald Trump are just as guilty. Hate is a human condition. I have an entirely different hypothesis to explain that phenomenon, but that'll be another post for another day.

After studying why people seem to dislike each other so much, I've come to a simple conclusion - we suck at empathy. Sure, most people claim to be empathic. They might even be able to give scores of concrete examples. But they fail to realize they're only good at empathizing with people a lot like themselves.

This is a really easy concept to test. Simply pick a controversial topic like gun control or abortion. Find someone with a strong opinion on the matter. Ask them to explain the motivations behind the other side's position. Almost all people can give an answer, but it's almost always their interpretation of the other side's motives, not the other side's actual motives. Seems like a small point, but it's hugely important. Complex social problems require complex answers, and complex answers require a thorough understanding of all the variables at play. In our modern world, this rarely if ever happens.

As someone who is deeply interested in leadership, this has always proven to be a really fucking hard puzzle to solve.

Humans are social animals. It's a major reason we're at the top of the food chain. In the most simplified terms, evolution has and continues to reward those that have the ability to play a role in a social unit. For our ancestors, this meant organizing into tribes, usually around 150-300 members. Sometimes smaller. Bigger tribes would usually consist of a collection of smaller tribes united for a common goal. These tribes had specialized roles, which is sort of the point of social organization. Specialized roles were filled based on ability, which has a strong biological basis. When individuals fulfilled their biological imperative in this way, they felt complete. Like, Jerry Maguire complete. They were fulfilling a role that was both personally intrinsically motivating AND they were contributing to the greater good of the tribe. Individuals prospered and tribes prospered. It would look kinda like this: 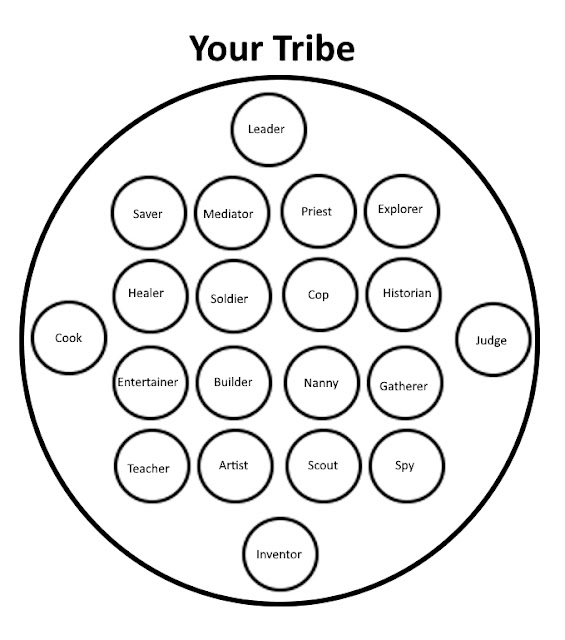 Then came the rise of agriculture. Industrial revolution. Democracy. The Enlightenment. The rise of the city. And yes, I know this list is not in chronological order. The point - we started organizing in ways that took us away from our tribe. But all the "tribal biology" remained. So we compensated by forming a new tribe. Many tribes, actually. Think about all the "tribes" you belong to today. For me, these are just a handful of my "tribes":


The problem in almost all of these cases is the issue of goals. Before we abandoned our hunter-gatherer tribal organization, survival was the game. In that high stakes world, people had a vested interest to bond with their tribe even if the tribe had significant differences. Joe, the dude who guards the perimeter of the tribe's camp, really, really hates people from the Jaguar Tribe. Sally, the tribe trader, is easily annoyed by Joe's frequent rants about those stupid, barbaric Jaguars because she knows them as kind, intelligent artisans. But their need for survival demands they find a way to get along well enough to make sure their tribe is the most powerful, thus assuring their survival. That model looked something like this: 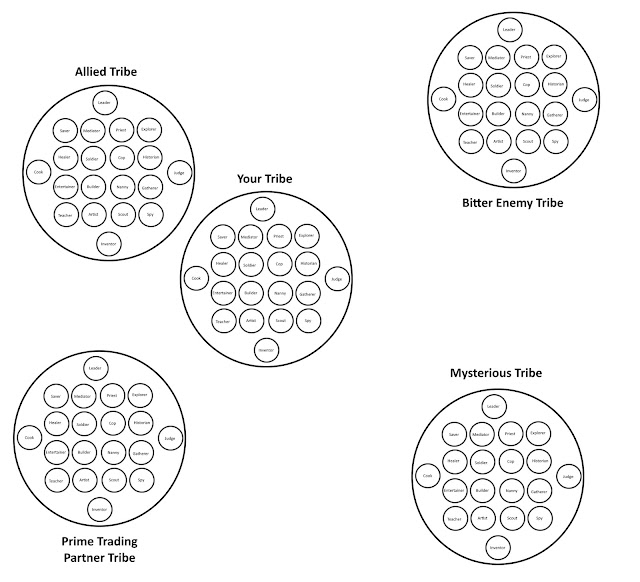 This wasn't too difficult because Joe and Sally knew each other really well on a personal level. Despite their obvious differences, they also had a lot of qualities in common. They both love dancing around a fire. They both love the cave paintings on the other side of the mountain. These points of similarity are only possible because Joe and Sally have the time and exposure to get to know each other.

Now take away that need for survival, which is exactly what we have in the modern world. Imagine Joe is a modern-day police officer. Sally is an international businesswoman. They still kinda rely on each other, but that connection is too diffused for either of their brains to really grasp it on a personal level. Worse, it's extremely unlikely they will ever get to know each other on a personal level. If they ever encountered each other in real life, there's no chance they would get along. Their respective views about strangers would be a chasm that cannot be crossed by either of them.

When we moved away from tribes required for survival, we still retained that innate need to form tribes. So that's what we do. The problem? Since we don't need the tribe to survive, we no longer need the tribe to consist of people to play specific roles. When we don't need people to perform specific roles, we will avoid the discomfort of surrounding ourselves with people that think differently. Instead, we surround ourselves with people that think like us, have the same belief system as us, and behave like us. In essence, we create echo chambers. Those echo chambers severely limit human potential because we simply have no reason to get along with people that have a different biological imperative.

A modern example - the gun control debate in the US. The anti-gun side believes guns are dangerous and need to be eliminated to keep us safe. Gun advocates believe the world is dangerous and we need guns to keep us safe. Both are right and both are wrong. But both sides are absolutely convinced they are right and the other side is wrong, and we see all kinds of cognitive biases popping up to reinforce that belief. On a practical level for someone interested in leadership, this poses a HUGE problem. A mutually-beneficial solution will be impossible in the modern world because neither side has any incentive to empathize with the "other side."

This problem is made infinitely worse because of social media. The one thing that keeps us from completely abandoning our drive to create specialized tribes is in-person relationships. We all have people in our lives that have a different biological imperative, but we bridge those gaps because we have a mutually-beneficial personal or professional relationship. And there's the whole "there might be negative consequences to bitterly disagreeing with this person in real life" issue. Social media mostly eliminates those barriers, ergo we create really, really restrictive echo chambers. Being right feels phenomenal, even if it results in a radically limited world view.

Conversely, let's say we were still organized as tribes. Joe and Sally's tribe, in fact. Joe would most likely be pro-gun; Sally anti-gun. They'd have a very different point of view, but they could use their personal connection and mutually-shared survival goal as a tool to bridge the gap and reach a compromise. That's only possible because they understand each other's point of view.

So How the Fuck Does This Help?!?


If a leader has any desire to lead a diverse group (which is inherently going to be more competitive than a homogeneous group because they're capable of responding to a much wider variety of challenges), they need a tool to get the group to move past their petty differences that result from different biological imperatives and resulting world views. Explaining the tribal organization hypothesis might be that tool.

Joe the guard and Sally the trader would normally be in a state of perpetual disagreement because they have no framework to understand each other. If this model were explained, they would come to see their world views, while different, are simply two different strategies to carry out the same function - allow the tribe to survive.

Will this work? I'm not sure. Is it worth a shot? Based on how few people I've met that actually seem to be able to empathize with people that aren't part of their echo chamber tribe, yes. It is worth a shot.

I'll probably add another post or two to hash out a few more points, like how modern man tends to ignore our biological imperative, which might be an explanation for our epidemic of chronic low-level mental health issues.