Jason, Why Are There So Many Beta Males In The Ultrarunning World? 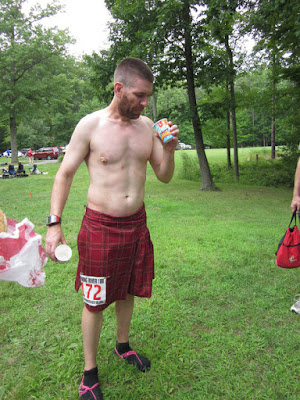 In the San Diego Man Camp Facebook group, we spend a lot of time discussing various hobbies. Many of us have at one time or another dabbled in the sport of ultrarunning. To the uninitiated, "ultrarunning" is participating in footraces of fifty kilometers or longer, often on trails. I'm intimately familiar with the sport as a participant and an analyst (it was the topic of my second book "Never Wipe Your Ass with a Squirrel".)

A few male and female ultrarunner friends, after reading this blog and my Sexpressionists blog, have noticed there seems to be a disproportionate number of beta males in the sport. I've made this same observation. In fact, my curiosity over this issue is what ultimately led me to start studying sex and gender issues again.

What are some Possible Explanations?

There could be many reasons beta males are attracted to the sport, including:


How About Another Hypothesis?

I've noticed almost all of the "beta males" in ultrarunning don't quite fit the typical beta mold across the board. Maybe they're not real beta males. Maybe many of the dudes who appear to be betas are actually "Nice Guys", who are basically closeted natural alphas who, through the conditioning process of modern Western society, have internalized the idea that masculine behaviors are bad. Here are the reasons:

How Do I Know If I'm One of These "Nice Guy" Beta Males/ Closeted Alphas?

Luckily, the warning signs are pretty clear, which makes it easy to distinguish between "Nice Guy" beta males who are really closeted alphas and actual natural beta males. "Nice Guys" have the following traits:

What Can Be Done?

If any of this sounds familiar, I can relate. Like, REALLY relate. This was me (read my story about overcoming this plight in this post.) If this shit resonates, know there are many of us who have overcome this, made positive changes, and are now living lives far better than the lives we once lived. The best part? Our improvements have made us better leaders, better boyfriends and husbands, and better fathers.

If you're interested in making positive changes, take a look at our Facebook group and consider a workshop. It could change your life. Sorry ladies, it's a male-only group, which is by design. I do have another mixed-gender Facebook group if any of these ideas sound a little too familiar. Or you just want to learn more about the topic.