Let's Sell the Kids and Move to Tahiti: Restlessness and the Need for Change 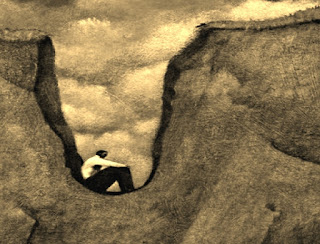 Most of us say they hate being in a rut, yet we do the exact same thing day after day, week after week, month after month, year after year. We wake up in the same house, drink the same coffee, take a shit at the same time, drive the same route to work, have the same conversation with colleagues, go home and watch the same TV shows, then go to bed at the same time.

We love our ruts.

Occasionally we throw in sex or a vacation to keep things interesting. It reminds us there's more to life outside our normal routines. The predictability of our ruts give us a sense of security and stability. These ruts allow us to engage in higher order thinking in order to compile those reports for accounting, daydream about that new restaurant on the other side of town, or contemplate the pointlessness of our existence.

But we're quirky animals. No matter how safe and secure we get, no matter how much comfort we surround ourselves with, we're powerless against one of the most powerful of human motivators:

These feelings are nothing new. Since childhood, I've had what could best be described as a serial hobbyist approach to life. Like anyone else, I love ruts. I just don't like spending all that much time in said ruts, and I don't mind making the tough decisions needed to change ruts.

My Life in a Nutshell

Every few years, I'll drastically change major elements of my life. This is what has motivated my career changes and geographic moves. The cycle is predictable. I'll have an idea fueled by curiosity, that will cause me to find something that interests me, and I'll throw myself into it with reckless abandon. This period is a time of great excitement and energy where I learn, explore, and grow. Eventually I reach a degree of competence in whatever it is I'm doing, then settle into a comfortable rut. There's still a lot of energy surrounding the endeavor as I work towards mastery. Once I feel I have a good handle on whatever I'm doing, the desire for novel experiences creeps in. If I ignore it, symptoms of burn-out creep in, the most significant being apathy and depression.

The most notable of these was the decision to leave the steadiness and security of full-time teaching to travel the country in an RV with Shelly and the kids. But there have been countless examples of this that have occurred on a smaller scale. All of my hobbies, like kicking footballs, woodworking, magic, ultrarunning, photography, Brazilian jiu jitsu and mma, writing, have followed this pattern. Same deal with other jobs, like working at a bike rental shop, in a grocery store, working at a concession stand at a baseball stadium, delivering for UPS, and working at lumber yards. That RV adventure with the kids, though, was the most significant.

Since that two year adventure, we've settled in San Diego. I eventually landed an entry-level job at a lumber yard and had the opportunity to make it a career. Well, kinda. Around the time I published Never Wipe Your Ass With a Squirrel, I had been promoted and had the opportunity to move into a full-time position. Unfortunately, it would have only paid $10/ hour and it would be years before I could realistically expect a raise. Since Squirrel Wipe was selling far better than expected and was producing a lot more income than I could earn at the lumber yard, it made sense to quit the job to promote the book full-time.

Since then, I've been working on developing a career loosely based on building an online audience, then leveraging that audience in various ways to develop income. The most obvious application has been selling books like Squirrel Wipe, but also includes things like online advertising, affiliate marketing, product reviewing, and real estate lead generation. All of these endeavors involve a whole lotta social media engagement, which requires sitting in front of a computer anywhere between six to sixteen hours per day. It's basically a process of attracting and maintaining attention. I'm pretty good at it, mostly because I've systematically studied the best practices of attention-whoring for the better part of the last decade. I'm really good at getting people to waste embarrassing amounts of time online.

The problem? This rut is getting exhausting. And boring. It's getting more and more difficult to work up the motivation to engage people online. There's a constant pressure to always be engaging because engagement is directly linked to income. If I'm not engaging, I'm not making money. The tighter the finances become, the greater the pressure to be working 24/7, to the point where it's difficult to disengage and spend time with Shelly, the kids, or even pursuing hobbies like jiu jitsu.

To complicate matters, my creative well has been running dry for an unusually long period of time. When I DO manage to garner attention, I don't have a good product or service to direct people to in order to capitalize on the effort. Squirrel Wipe is four years old, which is ancient in today's marketplace. The two books I've written since, Must Have Been Another Earthquake and No Bone Zone, were targeted to tiny niche markets that are not commercially viable. Trying to generate income based on these past works requires exponentially more work as time passes. I've been supplementing that income with substitute teaching and dabbling in real estate, but finances are still a struggle.

My other projects, like San Diego Man Camp, require significant development in order to produce enough income to support my family. I have a vision for this project, but it will take time to develop. I simply do not have the creative energy at the present time to do what needs to be done to make that happen. Normally I rely on months-long phases of manic creative energy to get projects like this off the ground, but that energy isn't there right now. And I can't force it. The more I try, the more pronounced the burn-out becomes. I could take a shortcut and use this information and these ideas do some version of "life coaching", but that world consistently gives me the "icky" feelings associated with fraudulent scammers who prey on the weak or gullible. As morally vacuous as I can be, I cannot bring myself to stoop to that level.

For a while, I thought real estate might be the answer. The income potential is greater than writing books, and we live in a ridiculously expensive housing market. Commissions are superb. Initially I assumed I was burned out from writing, ergo real estate would be the change I needed. While I thoroughly enjoy some aspects of real estate, I found I hated the actual selling part. It took a fair amount of introspection to realize why. As it turns out, real estate requires the exact same "always on 24/7" approach as my creative endeavors. We get a lead at 9:00 on a Friday night? We have to follow up immediately or lose the sale. This is no different than than the pressure of always having to engage an audience. The burn-out I've been experiencing generalizes. Who knew?

This issue of restlessness really came to a head over the last few months. It started with the desire to move to a bigger apartment or even a house. We've been living in a shitty two bedroom apartment (with three kids and three cats) in a somewhat shitty area for a few years now. It was cool for a long time because it exposed our kids to hardship and diversity, but we're kinda over that now. An external event completely unrelated to our personal lives really stoked the fire and led Shelly and I to start having conversations about possibly moving from San Diego eventually. We came to the conclusion the things that kept us here initially aren't nearly as significant as they were two years ago. Or even last year. The real telling moment came when we both started training for our upcoming mma fights. It has been FAR more difficult to rustle up the motivation to get through training camp than it was the last time I fought two years ago. The apathy is very similar to the feelings that started creeping in about six months before I ran my last ultramarathon, the Grindstone 100 in Virginia. I dismissed those feelings then, which led to completely abandoning running. I don't want to make the same mistake this time around.

Our current life here in San Diego has reached the end of the cycle. Shelly's reached a plateau at her job and I'm experiencing this burnout issue... the time is ripe to consider something different. It's time to either make changes here or move on to somewhere else. When we traveled, there were several other areas we loved, so we have a few possible destinations in mind.

So how do I manage this situation? How do I solve this burnout problem? How do I get out of this rut and find my new rut? The logical solution is to make a plan:

Being in a rut isn't a bad thing. Being in a rut and feeling restless? That's a different story. The older I get, the better I get at detecting when I need to change things up. More importantly, I get better at figuring out what I need to change, why I need to change it, and how to go about making those changes. It's definitely time to make these changes. We'll see how it goes. I've spent the last four years hustling to make my "creative" career work as a primary means of making a living, but it's run its course. It's time to move the creativity back to "hobby" status and chase some new goals.