Ronda Rousey's recent domination in the UFC has led to a flurry of Facebook posts and re-posts of articles celebrating her dominance. This has been fascinating mostly because a) almost every article is accompanied by a bikini pic, and b) hoards of guys have professed their love for her.

In our San Diego Man Camp Facebook group, we've had a few discussions about the exact reason we (men) find her so damn arousing. Yeah, she's pretty hot and famous, but there are hotter and more famous women. What is it about her that's so damn appealing? Some hypothesize the male adoration is a function of her sports dominance, but we don't see a lot of dudes that have added Martina Navratilova to their spank bank.

I hypothesize Ronda's appeal has to do with her fluid mastery of gender roles. If you've followed her career, you know Ronda wasn't always "model-esque." 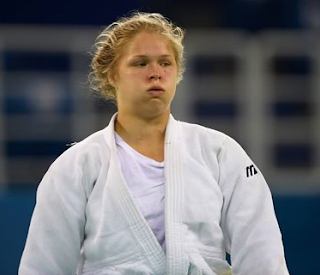 Compare that to one of Ronda's more recent pics: 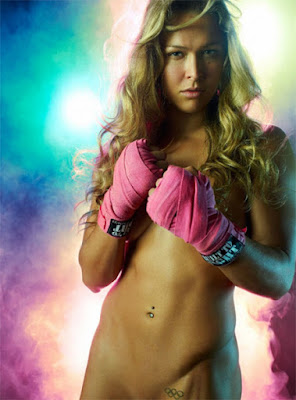 Pretty big difference, huh? Yeah, yeah, I know they're completely different venues (competition versus professional modeling.) The point - Ronda didn't always have the image she has today. Ronda, early in her mma career (through her coaching gig on TUF) came off as gruff, mean, and ridiculously intense.

Ronda absolutely mastered her own image by playing up her feminine side. Not only did she do all the sexy-as-fuck photo shoots, but she started getting dressed to the nines for red carpet appearance, started letting her clever, witty side come through in interviews (which comes off as confident flirtiness), and she started smiling a whole lot more.

In essence, Ronda went from being a really manly woman to a extremely feminine woman with a completely badass masculine side. Over the last few years, she's fostered that feminine side to the point where she's become a sex symbol. This feminine mystique combines with the ultracompetitive Olympic judoka/ pro mma fighter persona to create an incredibly deep, engaging personality. She regularly augments that depth by dropping little hints at her interests outside mma (like pro wrestling and geek culture) that just adds to her appeal. Hell, she has me sold. She's passed Miesha and is threatening to pass Lagertha on my laminated card. That's a 90's reference, for my younger readers. 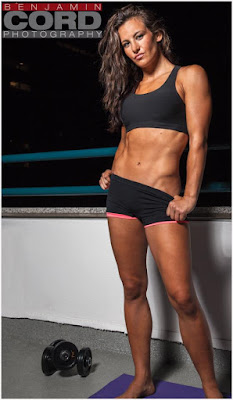 Yeah, I like chicks that are actual badasses (as opposed to the self-proclaimed back-patting faux "badass" women that couldn't take a punch to the face.) Not just fighters, either... I tend to dig ultrarunner chicks for the same reason. A woman that can face danger and suffering with enthusiasm kinda does it for me. While it would be easy to write it off as a weird confirmation bias (Shelly, my wife, is a feminine woman that can take a punch to the face), it's deeper than that. In essence:

We love people that confirm to a gender role, but love people more when they also have the nuanced ability to display the other gender.

How This Works For Noncelebs

What women are really saying is they want a manly man through and through. Once that man has established his masculinity (usually by passing shit tests), then and only then can they display emotion and sensitivity as long as neither implies weakness. A man that fails to establish that masculine frame first not only fails to arouse women, but he actively repulses them. The women that DO like weak, sensitive, supplicating males that can't establish a masculine frame are usually very low value and taking the best they can get.

The same dynamic works in reverse, too. A female that can play the feminine gender role to perfection is highly desired. Like Ronda, a female that can also display masculine characteristics after first establishing a feminine frame dramatically adds to her sexual market value.

It certainly worked for Ronda. She went from being a relative unknown in her own sport to one of the most popular celebrities in the world. Hell, I might find her brilliant mastery of her image almost as arousing as her Sports Illustrated spreads and her right hook to Bethe Correia's temple.

Posted by Alex Hamilton at 7:42 AM