In the past, I've made beef jerky in the oven. It's pretty simple, cheap, and efficient. My recent interest in disaster preparedness brought me to a trick used by The Food Network's Alton Brown (one of my favorite celebs on the network.) He used a box fan in place of a food dehydrator. This was significant because it was done at room temperature... which could be invaluable in the event the electricity goes out for an extended period of time.

Back in the day growing up in rural Northern Michigan, extended power outages were almost always the result of ice or snow storms. Refrigeration was as simple as rounding up a few coolers and filling them with snow. Keeping things warm was an infinitely more difficult challenge than keeping things cold.

Here in San Diego, we have the opposite problem. In the electricity cut out for an extended period of time, everything we have in our freezer would eventually spoil if we couldn't eat it fast enough. Having the ability to preserve any meats we were storing in the freezer would be invaluable, especially methods that do not require electricity. All of the methods below work by removing moisture, which inhibits the growth of pathogens. Some methods utilize chemicals to further inhibit growth. Here are a few fairly easy options:

1. Canning. This would be my preferred method because the meats would last for a very long time... but I currently do not own a pressure canner. And it would require a heat source that would last for the time needed to process the jars of stored meat.
2. Salt curing. This method involves either plastering a salty mixture over the meat or submersing the meat in a salty brine for a period of time. It's a good technique to know, but I was to impatient to try. That'll be an experiment for another day.
3. Smoking. I'd love to be able to hard smoke the meat, which is using a smoker to cook it at a temp higher than about 160° F. The problem with smoking? I live in an apartment with no exclusive-use outdoor area. If I smoked meats, I'd subject all of my neighbors to the smoke in one of our common areas.
4. Dehydrating. That leaves dehydrating. This process is handy because it can be done at room temperature. All you need is airflow. Low humidity and heat help, which we have an abundance of between March and November. Dehydrated meat can last anywhere from a few weeks to a few months depending on moisture content and storage method, so it would be an ideal method to process once-frozen meats.

This is the process I used:

Step one - Freeze the meat for about 30-60 minutes. This makes the slicing step far easier. This is the chunk I used: Step two - Mix the marinade in a large bowl.

Step three - slice the meat in 1/8th inch strips going WITH the grain of the meat.

Step four - Marinade the meat in the refrigerator overnight. If I did not have electricity, I would marinade in a plastic bag for an hour or so and just leave it in the coolest, darkest place I could find. 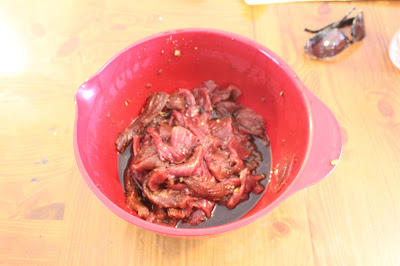 Step five - Set the box fan up like a table with the airflow blowing upward. Place something underneath the fan to allow for air to circulate. I used cans of beans. Spread the strips of meat over the drying racks, then place the racks on the fan. Turn the fan on high. 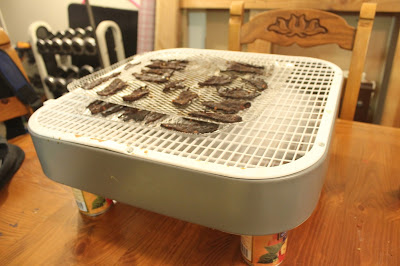 Step six - About every three hours, flip the pieces. This speeds the drying process.

Step seven - The amount of time required to reach the desired state of dryness varies based on the humidity, airflow, and thickness of the meat. I consider it "done" when I bend it and can see the fibers separating from each other. The general rule of thumb - the drier it is, the longer it will remain preserved.

Step eight - This step is "optional" in that I probably wouldn't use it in a disaster situation, but will for this test batch. I pre-heat the oven to 350° and bake the jerky for about six minutes on the same racks. The purpose is to raise the internal temp of the jerky pieces to 160° to kill any remaining microorganisms. 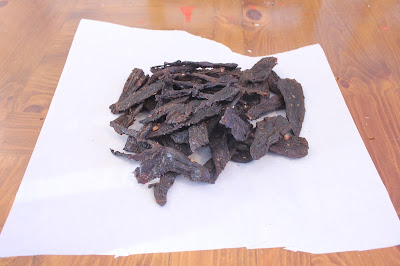 Air and moisture are the enemy. Allow the jerky to cool then place it in a breathable container, then store somewhere cool and as dry as possible. Avoid closed containers that will trap moisture unless something is used to absorb any moisture released from the jerky. Remember, the goal was to remove as much moisture as possible. If the jerky gets moist for any reason, it will quickly spoil or require immediate re-drying. 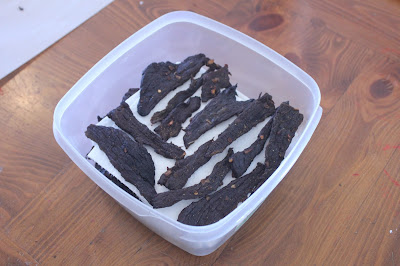 Vacuum-sealing would be the best option, but I don't currently own a vacuum sealer. Dry canning is the next best option. Heat the oven to 350°. Place an open mason jar, the lid, and the sealing ring in the oven for 10 minutes. After the 10 minutes, take the jar out, place the jerky in the jar, then immediately close it. As it cools, it'll create an airtight seal. I'll do this with half of my jerky. 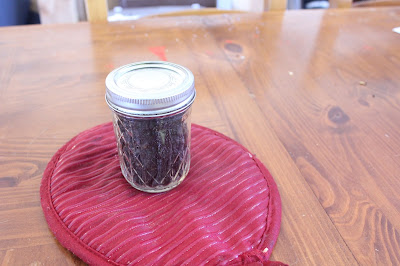 For the other half I'll be eating sooner, I just keep it in a sealed Tupperware container lined with paper towel in the refrigerator. It prevents airflow while still absorbing moisture.

I bet you're wondering why I was using a box fan when the purpose was to test methods that didn't require electricity. Normally I would use an alternative method, but it's winter here in San Diego. That means our normal hot, dry weather is replaced by pleasant 65° days with occasional rain. The natural environment doesn't produce enough wind or heat to dry the jerky before the microorganisms start to grow to dangerous levels.

If it were warmer, I would use a simple outdoor solar chimney to create the air flow. A solar chimney is really just a closed box or tube that creates airflow based on the idea that hot air rises. I make mine with taller, skinny cardboard boxes. Paint the outside black (I use kids tempera paint like they use in elementary schools.) Cut a large hole in the top and another hole on one of the sides at the very bottom. Devise some sort of way to support the racks inside the box. If there are a lot of flies or other bugs in the area, I'd cover the vents with a small piece of window screen.

When you place the solar chimney in the sun, it heats the air inside. That causes the heated air to escape the top while drawing in cool air from the bottom vent. Tada! Airflow.

The volume of air isn't going to be as high as what I can achieve with a box fan, but the heat and lower relative humidity of the warmer months makes up for the difference.

The ability to make beef jerky without an oven or a food dehydrator, while not the easiest way to preserve meat, is a nice skill to develop. Once you do it a few times, you start to get a feel for the art of dehydrating. Specifically, you learn how and why the meat responds to various methods, which allows you to become more proficient. It doesn't take much practice to be able to transfer these skills to a campfire scenario, which would be invaluable for long-term wilderness survival.

I suspect at least a few of my regular readers are ell-versed in jerky-making. If you have any helpful tips, leave a comment!

Posted by Alex Hamilton at 9:50 AM