How "The Patriarchy" Makes Our World Better 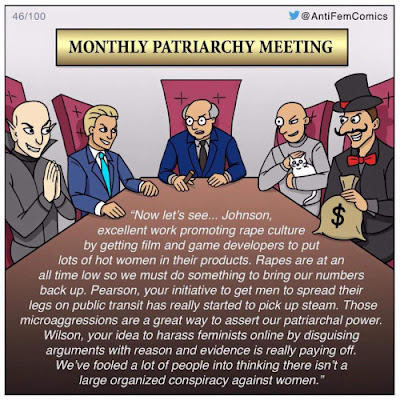 The following is a excerpt from my longer post from last year where I spell out the fundamental elements of the ideology I teach in the San Diego Man Camp. In light of the recent spat of mass shootings conducted by disgruntled males here in the US recently, I want to draw attention to this particular piece of the puzzle. "The Patriarchy" is often used as a Boogieman for feminists as the cause of all our world's problems. In reality, "the patriarchy" serves to guide otherwise destructive or lazy men into more productive endeavors.

Got it? Good, let's get started.

The Real Purpose of "The Patriarchy"

Fighting against "The Patriarchy" is a pretty common strawman argument used today to justify all sorts of attempts at silly social engineering. It IS true; we used to have a patriarchal system of government. Women were excluded from representation. Winning the freedom of equality under the law was the original goals of feminism. As I stated before, that was a great thing. People don't seem to understand, though, that patriarchy was a system to control men, not women. Women were oppressed under the system, but that was incidental to the real purpose of patriarchy.

The idea that men would have to create an entire social structure to control women should fall apart immediately when you consider one simple, irrefutable fact - men are physically stronger than women. Men don't need elaborate social structures like religion, codified laws and a judiciary, and social mores to control women. They can simply use force. Testosterone gives us a size, strength, and speed advantage, along with the capacity and primal drive to use aggression to engage in extreme violence.

Controlling each other, though... now that takes some work. THAT is the reason men developed "The Patriarchy."

To understand why men need to be controlled, you really have to understand the nature of masculinity. Masculine men have that shit-ton of testosterone flowing through our bodies, and that causes all sorts of well-documented behavioral and attitudinal characteristics. This effect leads men to follow one of three "paths" that are driven by our primal, biological imperative:

That's it. Those are the three options men have. If we create, we find a passion that helps our fellow man and follow it with all our heart. We become givers and strive to make ourselves the best version of us we can possibly become. This is the vehicle that has led to pretty much every major advancement of humanity. The problem with "creating" is that it's hard work. There are few tangible rewards along the way except for the journey itself. In fact, the overarching goal of the San Diego Man Camp (join our Facebook group if you haven't already done so.) This is also why I kind of despise beta males... they refuse to improve themselves or do the hard work to create. They sit on their asses, content with being "special for who they are." Anyway, I digress.

If we destroy, we become takers. This would include petty criminals, con artists, rapists, murderers, evil dictators, etc. Biggest problem with destroyers is that it's a lot easier than being a creator and one man can do a Hell of a lot of damage. A small group of men can do even more. We don't want men to do this; it sends society backward.

The final option is to simply kick back and do nothing productive OR destructive. Weirdly, men have the capacity to be ridiculously industrious AND complete and total lazy fucks. This is your typical lazy fuck beta male chump today, which is encouraged by modern feminists that attempt to "redefine masculinity."

So what does this have to do with patriarchy?

Waaaayyyy back in our evolutionary history when we were still hunting and gathering, men didn't really have much of a choice. They were productive when they needed to hunt or build shit for the tribe. They were destructive when they had to protect the tribe or forcefully acquire resources from neighboring tribes. Finally, they were lazy the rest of the time to conserve energy for famines and other harsh environmental conditions. The tribes that had the most men that could successfully do all three survived and killed those that were less successful. See where those drives originated and were selected via natural selection?

Eventually we discovered agriculture, which led to villages, towns, and eventually cities. Larger, more diverse populations and more specialization meant not all men needed to use all three of these drives, but we still possessed the potential. And sometimes bad shit happened when men decided to destroy. Or get lazy. The leaders, at some point, started devising ways to control and channel men into a pro-social way. Those methods fell into three categories:

The problem with force is that it takes a lot of time and resources, and doesn't work especially well over a long period of time. Imagine a dude standing over your cubicle with a whip. Positive punishment, in operant conditioning terms, needs to be immediate, severe, and consistent to be effective. You end up needing almost as many whip-crackers as male workers. That's a pretty inefficient system.

The problem with bribes is that it takes a lot of resources and it causes an extrinsic motivation effectwhere we eventually hate what we're "paid" to do. Think of how many Americans today despise their jobs. Without kids to raise and sex (only the rich handsome males had regular access to women, that's why the ancients were polygynist), there was little motivation to work for rewards long-term because the rewards become ineffective.

That left "family life." At some point, leaders realized men would be motivated to choose the "create" option if they were doing it to provide for a wife and kids. He would be motivated by sex from his wife and the desire to get his genes into the next generation.

The problem with family life is that we're not all that well-suited for lifelong monogamous pair-bonding. We're inherently kinda slutty AND there's the problem with polygyny I mentioned before where only the best males had wives. The idea of monogamous marriage and the expectation of sexual fidelity solves that problem because it gives a lot more men access to wives. However, it requires systems to control men's desire to fuck as many women as possible and women's tendency to always seek the best male they can attract. THAT is where all the oppression of patriarchy comes from. The oppression of females, which did happen, was just a consequence of controlling men.

Today, we've effectively ended the patriarchy. Women now have all the legal freedoms men historically enjoyed. We now have a social, legal, and economic system that allows women access to anything and everything men have access to, which includes government support should they decide or become a single mother. It's easy to get married, easy to get divorced, premarital sex and cohabitation are common and accepted, serial monogamy has replaced "till death" monogamy as the norm, and ethical, consensual nonmonogamy is increasing in popularity.

Needless to say, all of us have incredible freedom. But that freedom comes at a very, very serious cost because far too many of us still deny that gender matters. A lot.