An Introvert's Plan to Survive in an Extrovert's World 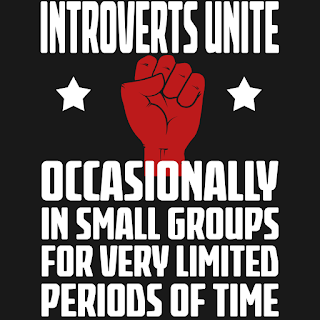 Sometimes being an introvert sucks. Like, seriously sucks. We live in a culture that is built around extroversion, which can present problems for introverts. Non-introverts simply do not understand the nature of our occasional social avoidance, so most of us are written off as weirdo hermits. As a confirmed introvert and type of person who loves lifestyle experimentation, I've spent years tweaking my lifestyle to integrate my introvertedness with our extroverted world, which I'll elaborate on later in the post.

Lately, however, this has become a challenge. I started working two jobs, one of which has a very long daily commute. Between working, spending time with Shelly, spending time with the kids, and working out (mostly doing jiu jitsu), I have very little quiet "down" time. It's a temporary condition in preparation for moving, so I'm not sweating it too much. But it has led me to really explore the idea of introvertedness, how I manifest the personality type, exactly how it affects me, and what I can do to make the next year more tolerable.

Before we get too far, let's operationally define the terms.

An INTROVERT is someone who is more inwardly-focused, feels tired and drained by social situations, prefers less stimulating, quiet environments, is less attenuated to social cues, and tends to be less impulsive. Introverts would rather be curled up on the couch with a cat and watching Game of Thrones.

An EXTROVERT is someone who is more outwardly-focused, feels energized by social situations, prefers more stimulating environments, is more attenuated to social cues, and tends to be more impulsive. Extroverts would rather be dancing the night away at a crowded club.

Are you somewhere in between these two paradigms? No worries; most of us fall somewhere in the middle. But we probably lean one way or the other.

If you want to know more about the prevailing definitions and the supporting science, check out this article. If you want to test yourself, try this simple online test. I got something like 78% introvert. If you're really interested in personality assessment, this online test is one of the better tests based off the Myers/Briggs assessment. I'm an INTP... which kinda explains my fascination with this topic, eh? 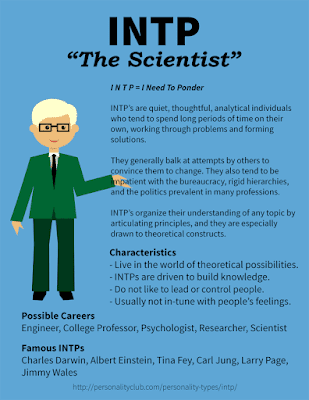 Before I get to my ideas for experimentation, I'll explain my experiences with introversion and how I've managed to thrive in an extroverted world... especially as a teacher. Fellow introverts will probably nod in agreement; extroverts will find all this shit weird.

Throughout my childhood, most people assumed I was somewhat shy because I spent a lot of time alone and would avoid many social interactions. I come from a family that loves talking endlessly, which I've always found to be fun for about fifteen minutes, then absolutely exhausting.

For a long time, I thought "shyness" was more about getting fatigued from being around people instead of experiencing a degree of social anxiety. By the time I reached college, I finally began to understand the nature of introversion. Also by this time, I had noticed that I could be socially awkward if I wasn't being "on", and being "on" for too long was mentally and physically exhausting.

Unfortunately, it took many years for me to fully understand that I required daily quiet solitude to recharge. As a classic "Nice Guy", the approval of others was important to me, especially those closest to me. I would force myself to engage in social situations even after I had long-exhausted my tolerance for social interaction. The predictable result? I'd get anxious, then depressed, then engage in negative self-talk that deepened the depression. That led to extreme irritability, becoming easily frustrated, angry, and aggressive. But I didn't want to let people down, so I developed a tendency to engage in martyr behaviors. It wasn't pretty.

Somewhere around a decade ago, I learned to say "no." That gave me the most powerful tool in the introvert toolbox. For me, that was revolutionary. It allowed me to break the cycle of anxiety and depression, which improved pretty much every aspect of my life. I started to formulate a method to regulate social interactions effectively. I've been using this system for a number of years now, which has become increasingly important since having kids and settling into uber-crowded Southern California. It's almost impossible to get away from crowds of people and heavy traffic, so every trip outside my apartment door is going to require significant social interaction. My system helps me survive the urban sprawl.

I imagine I have a "social interaction gas tank." This represents how much social interaction I can effectively tolerate on a daily basis. Under normal circumstances, the tank starts every morning with 10 units. Every social interaction removes a certain number of units from the tank, and some have a higher cost than others. Some examples:

I can spend up to ten units normally with no negative side effects. Once I drop below ten, I start creating a deficit. The greater the deficit, the greater the anxiety I experience, and the greater the depression and irritability gets, and the longer it takes to subside. Perhaps worse, I lose the ability to be "on" and effectively interact with others. Normally I'm pretty witty, charming, warm, and playful. When the tank begins to run dry, I get irritable, fidgety, and lose the ability to follow conversations. This effect, annoyingly, seems to be completely involuntary and irreversible in the moment. Except...

... some things will actually add units to the tank. If the tank begins to run low and I have unavoidable social interactions I still need to tackle, I can rely on these to give me a little boost. For example:

If I've had a long day of work and had to run a few errands, a glass or two of wine might be just enough to get me out the door to the gym. Or some morning sex might be enough to get me through shopping and attending a coworker's birthday party. Or those drinks might help get me through an extended social situation with friends if we're out in public.

A few months ago, some of my gym teammates were fighting on a local mma promotion's card. The venue, unbeknownst to me, did not serve alcohol. There were a lot of acquaintances at the fights, many of which came up to me and started chatting. The first hour was fine, but it quickly went downhill with each person that came up to me and engaged in small talk. Shelly (also an introvert) and I ended up leaving early as soon as our teammates were finished in order to "get good seats" at our post-fight destination, one of our favorite bars. I had to bail early; I simply couldn't tolerate the people and noise any longer.

My day-to-day existence thus becomes an exercise in balancing the equation daily and over the course of several days. Deficits from one day will carry over to the next, so the equation has to eventually balance. I can go into a deficit on any given day, but the further I go into a deficit, the longer it takes to recover.

I can use this to roughly plan out each day, and also use it to help me decide whether or not to do something that pops up. Right now, my schedule has gotten difficult because I'm working two jobs with a long commute in traffic four days per week followed by a half-day of work. I'm spending 13 units as my default, and even more if I have to run errands, meet up with people, there's an accident on the highway, etc. The average is somewhere around 15 units spent daily. If I'm getting great sleep and have a few drinks every night, I can balance this out fairly easily. But one night of bad sleep or unexpected events requiring social interaction can fuck the whole thing up and require me to basically hibernate when the weekend rolls around.

By the time the weekend rolls around, I'm almost always facing at least a little bit of a deficit that requires balancing, so I tend to become a hermit to some degree. We try to get out of the city as much as possible by either going camping in the mountains or escaping to El Centro, a small, sleepy town in the middle of the desert east of San Diego. For most weeks, I can get back to a zero balance by Sunday evening.

The problem, of course, is that sometimes I can't get back to a zero balance. Well, that and the fact that I'm using alcohol as a coping mechanism. As the weeks pass, I get a little deeper into a deficit each week. Luckily I'm working in schools, so we have fairly regular vacations and can balance that accumulated deficit.

The first batch of ideas involves reducing the "cost" of socialization. For example, driving in heavy traffic normally costs 3 units, but avoiding the traffic by taking longer-but-less-traveled alternate routes might reduce the cost to 2 units. What else can be done to reduce the cost of necessary activities?

The next few strategies involve attempting to increase the size of fuel tank. This usually doesn't work all that well, but it's sometimes enough to help squeeze as much social time out of the day as possible.

Finally, here are some activities that might refill the tank. These are the activities that go beyond helping me cope and instead make me feel recharged.
I'll be working two jobs for the foreseeable future... possibly for the next five months. This timeframe will give me ample opportunities to test most of these ideas. While I love being an introvert, social obligations are a necessity in my life. The better I can get at navigating introvertedness, the more effective I become. We'll see how the experimentation goes.

What do you think? Are you an introvert? If so, does any of this resonate with your experiences? What "coping" mechanisms to you use to survive in our extroverted world? Share by leaving a comment!

Posted by Alex Hamilton at 7:19 AM No comments: