Ladder Theory: Why Alphas Get the Girl and Betas Get Friendzoned 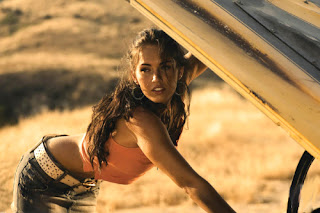 I've been getting a lot of questions on the sexual market as of late. Interestingly, it seems as though a lot of my former beta male detractors have started realizing all my posts on gender roles in general and women in particular are spot-on accurate and realized their entire world view has been seriously fucked up. Viewing male-female interactions in economic terms, while not flowery and romantic, does provide an incredibly useful guide to making intelligent decisions that help men attract women for sex, or if interested in a relationship, helps men manage healthy, happy, mutually-fulfilling relationships.

Most of the questions revolve around the actual mechanics of the sexual market. The soon-to-be-reformed beta men want to know how women value them (which I sort of addressed in this post) and they want to know the hows and whys of the dreaded "friendzone." To answer these questions, I'm going to use the Ladder Theory (after you finish this, go read the entire site.) Ladder Theory is an idea that's been around for a while, and is really a simplified version of all the shit I talk about in my Women, Explained posts. The theory uses a ladder analogy (imagine that!) to explain how both men and women value each other, which then determines attraction and relationship behaviors. Before we get to the actual ladders, let's discuss how men and women determine attraction. In other words, what does each gender look for in a mate? Let's start with men.

Men are pretty simple. We want a hot woman that's willing to give us sex. Here's a pie chart: 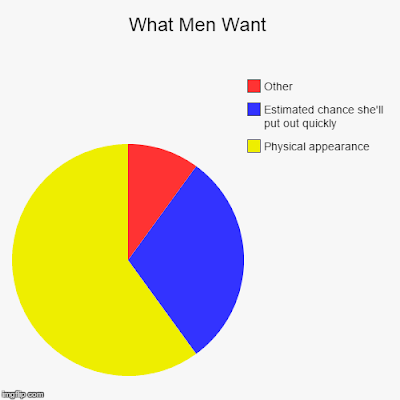 It's quite simple. Men value women primarily by appearance (as proven by the sheer amount of money women spend to boost their appearance.) As I've discussed before, "physical beauty" is essentially "youthful and healthy" which are biological indicators of fertility. That includes things like facial symmetry, a waist-to-hip ratio of 0.7, full breasts, plump lips, clear skin, shiny hair, etc. Promiscuity also factors highly, which is the reason some cosmetics like lipstick and blush mimic the appearance of sexual arousal. The "other" category includes anything else men might find alluring on an individual basis. Think of this as individual fetishes.

I prefer the modified two-ladder model that's not used on the Ladder Theory site. The original simply had one ladder that measured "fuckability." Basically every woman a man meets is placed somewhere on the ladder. The two-ladder model adds a second "wifey material" ladder for long-term relationship prospects. It looks like this: 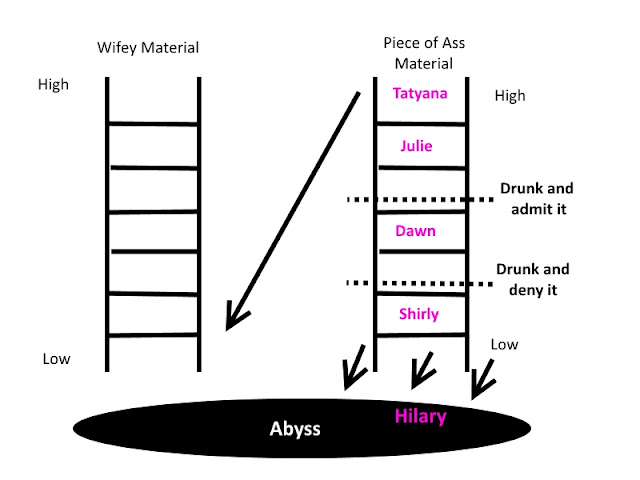 Let's start with the ladder on the right. This is where all non-desperate betas place women when they first meet. If a woman is hot (Tatyana), she goes at the top. If she's pretty good (Julie), she goes a little lower. If she's not all that great but still fuckable if you've had a few beers AND your friends won't tease you, she goes below the first dotted line (Dawn.) If she's pretty bad but still fuckable when drunk AND your friends would tease you, she goes below the second dotted line (Shirly.) If she's so repulsive you wouldn't touch her even when stupid-drunk, she falls off the ladder into the Abyss. The Abyss is reserved for the women that are simply un-fuckable. Women may fall here for a few other reasons besides very low value, like a relative or lesbian. It should be noted this positioning is not absolute. If a guy is desperate (like if he's having a dry spell or is getting ready to ship out for a tour of duty in Mongolia), he'll lower his standards.

The women at the very top of this ladder will often make the jump to the bottom of the "wifey material" ladder. As a man gets to know these women better, they may move up the wifey ladder.

The wifey ladder works the same way. At the top are the extremely high value women. They're around the age of 24-25, strikingly beautiful, sexually-available, and match our preferred individual tastes. They also have traits that would make them ideal long-term partners like respect, loyalty, a willingness to express appreciation, and lots of uninhibited, passionate sex. The lower a woman scores on these traits, the farther down the list she goes.

Female preference is considerable more complicated, mostly due to hypergamy. Let's take a look at the female graph: 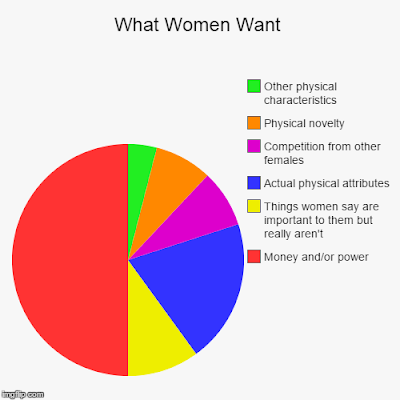 As you can see, women have a lot more "things" they look for in a man. The obvious one is money and/or power. This includes personality characteristics that imply power, like how you dress, confidence, narcissism, and assertiveness, among others. Here in the United States, these two usually go hand-in-hand.

Men - if you want to improve your chances with the ladies, maximize all of these categories.

Females have two ladders, too. The "Real Ladder" is designated for the dudes they will fuck. The "Friends Ladder" is for dudes they will not fuck, which is what we call the "friendzone." As I discussed in this post, a woman's first impression of you is absolutely critical because it will determine not only which ladder you occupy, but it'll likely remain that way forever. That post pretty much sums up the process women use to make that decision. Needless to say, the higher value you appear in that first meeting, the more likely you'll be placed on the Real Ladder of fuckability. It's important to note the Real Ladder isn't just for casual sex; placement on the Real Ladder is also necessary for men she wants to have a relationship with. This is what her ladders look like: 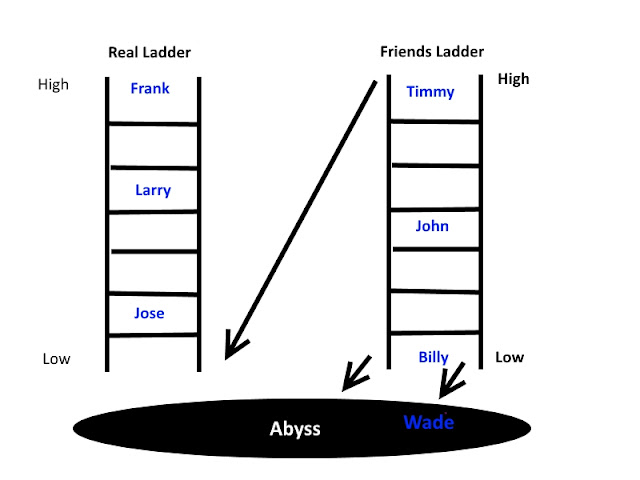 Let's talk about the "Friends Ladder" first. Being a beta while a woman is making that first impression is the most reliable way a dude can assure he'll never see her vagina. Unless, of course, he's serving as a neutered, platonic assistant for her bikini wax. Once placed on the Friends Ladder, placement is more or less determined by utility - what can the friend do for her?

If he's a great, supportive listener who likes to cuddle and never, ever tries anything sexual, he could be at the top of the ladder (Timmy.) These are the dudes that serve as emotional tampons when a woman breaks up with a dude on the Real Ladder. If the dude is attractive, she may use him to help ward off lower-value males in bars, clubs, or other social situations where she may be approached by pretending he's her boyfriend. Lower value betas may do things like paint her nails, go shopping with her, run her errands, or serve as a taxi service (John.) The lowest value males on her Friends Ladder are usually just kept around to boost her ego by providing constant "you're such an amazing, beautiful person" affirmations (Billy.)

If a dude is creepy, excessively needy, or really low value (think fat, unemployed, boring, indecisive, etc.), he'll fall into the abyss and she won't tolerate his presence (Wade.)

Now the Real Ladder. If a woman places a man on THIS ladder, she will be willing to have sex with him without all that much hesitation. The higher the dude ranks (based on the values from the pie chart), the less hesitation she will have. Basically, rich handsome dudes with good game sit at the top of the ladder, then all the other fuckable males follow. There's not a lot to say about this ladder other than a woman is always trying to attract the highest value male she can, even if she's in a committed relationship. That's why women shit test to constantly test their man's value, and also the reason so many 21st Century "beta marriages" fail.

I can almost hear my beta male readers right now - "BUT WAIT, HOW DO BETA MALES GET ON THE REAL LADDER?!?"

Good question, kids. For this, you have to understand female sexual market value and how it changes as a function of time. Most women hit their peak value between 23-25. After that point, their value begins to drop. Most women aren't consciously aware of this until they notice very high value males aren't paying as much attention to them as they once did. After a period of time, they realize their value is going down with each passing day and will "cash out" their chips by finding the highest value male they can land that's willing to commit.

THIS IS THE ONLY TIME A FRIENDZONED DUDE CAN MAKE THIS JUMP FROM THE FRIENDS LADDER TO THE REAL LADDER AND NOT RUIN THE FRIENDSHIP/ RELATIONSHIP!

Sounds great for that beta; he finally won! Until he experiences the 21st Century beta marriage cycle. Relationship ruined anyway. Still, some betas will say it's worth the risk. The problem, of course, is that they'll likely waste years of their lives loving their crush without any sort of actual sexual reciprocation. If they're really persistent and can out-beta all the other betas that are crushing on her, he'll win the opportunity to enter that beta marriage trap. If you're THAT big of a masochist, I'll just say you've been warned. If you really do care for her, just leave. Her experience in that 21st Century beta marriage is going to be pretty damn bad, too.

The take-away: Don't be friends with a woman you want to fuck if she's giving you any sort of what you perceive as mixed signals.


This detailed analysis using the Ladder Theory should help clear up a lot of the questions I've been getting from my former beta male detractors that originally questioned the ideas. In the near future, I'll write a post on the exact nature of male/ female friendships. I'll talk about the dynamics that govern these friendships, and I'll also discuss how a woman's friends (both male and female) can be used to judge her quality. Hint: There are a few HUGE red flag situations that should be avoided at all costs.

Stay tuned for those nuggets of wisdom. ;-)

Posted by Alex Hamilton at 6:08 AM