Frenemies and Girl Power! The Fickle Nature of Female Kinship 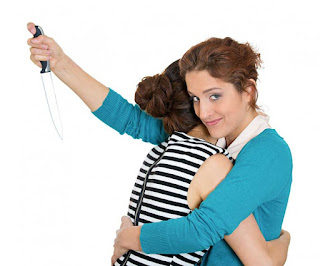 When I wrote my Women, Explained series over at my Sexpressionists blog, I didn't discuss intra-female relationship dynamics. Since I've received a few questions on the topic, I decided it was important enough to discuss here. Almost all questions center around a concept that's confusing to guys: Women appear to militantly support their fellow women at times, while also having a willingness to be frighteningly cruel to their fellow women at other times. What gives?

Before I explain female-female relationships, let's briefly explain male-male relationships. Men basically divide other men into two groups - men in their tribe and men outside their tribe. That "tribe" could be a family, group of friends, social club, community, sports team... whatever. Within our tribes, men rank themselves based on social status (the most alpha alpha is at the top and everyone else fills in appropriately.) Your standing in determined by all the other males in a fairly complicated but mostly unconscious ranking system that is contextual. An alpha in one environment won't necessarily be an alpha in other environments.

The key - the ranking within that tribe is based on honor, or the respect you earn from the other men. Engaging in certain behaviors that help the tribe increase your status, whereas behaviors that hurt the tribe decrease your status. This system of rewards and punishments dictates a great deal of male behavior, and makes the honor of the tribe more important than an individual male's sexual strategy (how he attracts the highest value female he can attract.) This also explains why men create pretty clear, black-and-white "us versus them" dichotomies (modern example- think sports team.)

Okay, What About Women?

Women, by default, are going to support the cause of promoting female interests. This is the whole idea behind "You go, girl!" or the "Be a badass alpha woman!" articles from HuffPost Women and Salon. This is most evident when a female is attacked and scores of females come to her rescue. In fact, this is sort of the mechanism behind the entire feminist movement - women supporting other women. There's a clear loyalty women feel towards their own gender as a whole and it's rare for women to adopt that strong tribal in-group/ out-group bias men form. 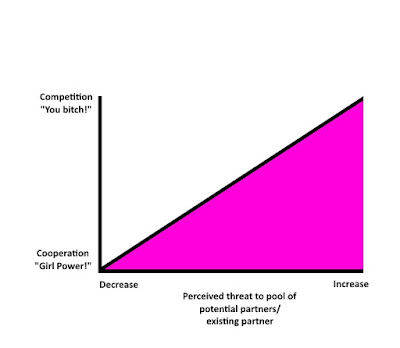 This effect may be the default female setting, but it's easily overridden by a higher priority - a woman's individual sexual strategy. The rule: A woman will always act in a way that improves her ability to attract or retain the highest value male she can. That means the "girl power!" loyalty is only as strong as it's utilitarian purpose to supporting an individual woman's own mating pool.

When that competitiveness is triggered, we see all sorts of "catty" behaviors where women ruthlessly attack other women. The methods used usually include building an alliance of multiple women to attack the woman that's deemed to be a threat, using name-calling (slut-shaming, fat-shaming, skinny-shaming, etc.), spreading rumors, back-stabbing, trying to redefine the standards of youth and beauty (hello, "all bodies are beautiful" articles!) to exclude the threat's most attractive characteristics, and the biggest gun in the arsenal - social exclusion.

The point - that "girl power!" kinship disappears in an instant because a woman's social network is secondary to her reproductive prerogative.

The Implications for Male/ Female Friendship

Over the last few weeks, we've had a few discussions in the San Diego Man Camp Facebook group (ask to join, dudes, we welcome new members), we've talked about male - female friendships, are they possible, and are the advisable? My official stance - sure!

However, that comes with an important qualifier. Men really need to understand that women do not use the same "honor code" men use to regulate friendships. If a dude tells another dude a secret, he keeps it because revealing the secret dramatically lowers his status among the other males in his tribe. Women, on the other hand, have no such social penalty. Even if a female friend violates that trust code and is devalued in the eyes of the male friend, her social value does not drop. Because of that, self-disclosed personal information is essentially used as a tool by women. As soon as it can be used to advance her sexual value in some way, she'll use it. As such, I recommend men treat female friends like the Internet - Don't put anything out there you don't want the world to know.

Implications for Beta Males and the Dreaded "Friendzone"


Beta males, almost without exception, really don't understand the "friendzone." For the uninitiated, this is what happens when a male expresses interest in a female but she does not reciprocate. To the guy, it seems like the woman is just giving mixed signals and may eventually come around after he demonstrates what a good friend he is. The woman, however, is being perfectly clear - she has no interest in the friendzoned dude because she believes, accurately or not, that she has better options.

Her "niceness" isn't a sliver of opportunity that indicates she's sort-of interested. Her niceness is just that - niceness. She's just treating you as a friend. The key - females treat male friends just like female friends. There is no honor code; the friendship is secondary to her sexual strategy. This is what burns so many beta males - they have a crush on a girl and may even make it obvious, but she resists and eventually hooks up with another dude. In many cases, women will use the friendship with the beta male in a way that helps her land the dude. The beta is crushed and, in many cases, becomes bitter and resentful towards the woman. That's silly; her perceived slight happened because the beta dude applied his template of how male friendships work on her, then expected her to live up to his standard.

Interestingly, beta males seem to pick up on this inherent instability of female friendships and apply it to their own male - male friendships. Beta males really don't "get" the system of honor that normally defines male friendships because, to them, friendships are merely a mechanism to indirectly aid them in getting what they cannot directly ask for or take. This is one of the reasons beta males don't have a lot of male friends - they don't trust other males because they think other males think just like them. The only reason beta males befriend women is in hopes of demonstrating their ability to assimilate to the feminine gender role, which they mistakenly believe women find attractive and sexually arousing.

Previously, I mentioned the "All bodies are beautiful" trope that I see plastered all over my news feed. This sentiment is annoying to me because it's usually directed at and places blame on the vague concept of "the patriarchy", when in reality almost all body-shaming is done by females. That's the case with pretty much all pro-women sentiment expressed today.

That realization came from a female friend from the past that was an adamant supporter of "redefining female beauty." She spent hours writing long, convincing blog posts about accepting all humans for their inherent value as people instead of looking at their "flaws" as defined by our oppressive, shallow, white, cisgendered, straight male culture.

And then I witnessed her and a group of friends discussing her boyfriend's new female coworker for whom she had never personally met and only saw from afar.

But there was nothing wrong with her. She was merely conforming to a rule of female behavior I mentioned earlier, which is fueled by hypergamy:

The rule: A woman will always act in a way that improves her ability to attract or retain the highest value male she can.

Her loyalty to supporting the plight of women disappeared in the face of her self-interest. This is important to understand because many women are also adept at using the cover of "Girl power!" to hide their own personal sexual agenda. Attempts are "redefining" universal beauty standards isn't meant to make our world a better, more accepting place. It's meant to give lower-value women a value boost. This isn't gender-specific; men do this, also (cough, cough, dadbod acceptance, cough.) The important point - it's motivated out of self-interest, not actual "social justice."

WOMEN ENGAGE IN FAR MORE MISOGYNISTIC BEHAVIORS, BOTH TOWARDS GROUPS AND INDIVIDUALS, THAN MEN.

When feminists say they want to end female oppression, they need to start focusing on themselves, not men. Here's a nice corroborating article.

Hopefully this post sheds a little light on female behavior men usually find confusing. Once you understand the underlying dynamics, female behavior becomes a lot more explainable and predictable, which is one of my major goals here at SDMC.