SDMC Case Study #1: I Nag the Shit Out of My Husband

We've had some great discussions in our SDMC Facebook group (interested dudes are welcome; sorry, no ladies) regarding relationship issues. Many of our discussions actually hit on important points that should be shared with the world, but the group needs to remain closed and private. The solution? A new series: SDMC Case Studies!

It'll work like this - I'll pick out a news story, blog post, or other example of a relationship situation, then give some analysis based on the principles we discuss in the group. Regular readers - feel free to recommend stories, or even submit your own story for analysis. Don't worry, I'll change names and identifying details to protect anonymity. Send submissions to me via Facebook. 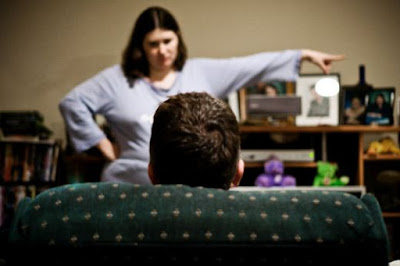 This "open letter" was written by a wife that realized she regularly belittles her husband. Read the article before going on. The details of exactly what she says are important to the analysis.

This is a pretty common occurrence in modern relationships. Well, the nagging part. The woman coming to that realization on her own? That's a little more rare. And telling.

Here are the facts:

Assuming they're roughly the same age, they got married at around 23 (see #1 and #3 above.) She would have been at her peak value. She married him because he had some alpha traits (#8) coupled with great beta provisioning traits (#11) and relationship skills (#10), but her nagging (shit tests) over the years (#4) killed that because he failed to pass the shit tests by standing up for himself.

Assuming she's also around the age of 35, she married him around her maximum sexual market value. Odds are good she dated around, maybe hooked up with a few alpha males. She cashed her chips in with him because he was a good mix of alpha and beta traits. They probably had a year or three of hot, passionate advertising sex, then the honeymoon period ended. They had kids. She started nagging not because she's a cunt, but rather as a test to confirm he was the same high-value male she married (women continuously test the value of their mate.)

He obviously failed those tests because he desperately seeks her approval (beta behavior.) She's spent years eroding his value to the point where she's assessing the state of the relationship (#9), which is a common sign she's mentally getting ready to make a "should I stay or should I go" decision.

Her own value has been plummeting since about 24 or 25 due to the natural decrease in women's sexual market value, which takes more of a hit because she has kids (#2; single moms on the dating market do not fare as well as women without kids.) She doesn't get the male attention she did in her youth due to age and probably poor fitness, which is the trend here in 'Murica.

Ideally, she wants to land a hot, confident guy (alpha fucks side of hypergamy) that also has excellent relationship skills and is a great provider for her and her kids (beta bucks side of hypergamy.) Unfortunately, her low value assures that won't happen; those men would have far better prospects. Odds are good she would even have trouble finding a hot alpha for a one-night stand or a high-value beta that was more assertive than her husband.

Those lack of options causes her to attempt to rationalize staying with her husband by asserting that he may not be able to stand up to her, but he has a few redeeming alpha traits left (#12.) She further rationalizes his shit test failing by blaming her behavior on her friends and popular culture (#5), then rationalizes that his failing is a good thing (#6.) It's clear she has no idea these are the actual gender dynamics at play, which is evident by wondering why he doesn't do these nagging behaviors in return (#7.) It's safe to assume she actually knows very little about typical male and female behaviors, so her lack of introspection further lowers her value.

At the end, she reports she's tried to stop nagging and has mostly been successful. The relationship seems to be getting better. The problem - women never stop testing men's value. She'll either go back to nagging or use other forms of shit tests. Since he hasn't changed at all, he'll keep on failing, thus continuing to erode his value in her eyes.

Because he's a good provider, they have kids, and her value is low and dropping due to age, odds are good they'll stay married. His beta behaviors assure he won't leave her; he needs her affirmations (and vagina) too much. He probably already resents her because she nags all the time and their sex life, when he gets some, is comprised entirely of maintenance sex (betas don't make vaginas tingle.) Odds are good she hasn't given him a blowjob since Dubya was president. She probably doesn't even kiss him anymore. That resentment makes him extremely vulnerable to being poached by another woman that shows him even a sliver of attention. Should that happen, he'll fall madly in love with the new woman, assume she's his soul mate, and leave her and the kids. The new woman will provide the female affirmations he desperately craves. It'll come as a complete and total shock to her because he will have hidden his resentment (classic "Nice Guy" behavior.)

The other likely scenario is that she'll eventually stumble upon an alpha pickup artist with low standards, and she'll hook up with him. That may happen a few times with different dudes (the men are going to avoid any sort of ongoing commitment like she has the plague... low value woman with kids versus hooking up with new women all the time? Not a hard choice for them.) She would hope to get a commitment, but they'll balk. She'll become increasingly desperate to find a replacement husband, so she'll start looking for lower and lower value alphas in hopes of finding a diamond in the rough. If she does, she'll leave her husband and probably the kids. She won't bother going for another beta; she already has one of those.

The third option - they just keep going as-is. You know, for the kids. This is highly unlikely, but possible. They'll both become increasingly unhappy and probably resort to drugs or throwing themselves into a hobby (ultrarunning?) or career to make their miserable existence tolerable.

The problem is neither member of this couple has any fucking clue what they're doing, but both are desperate to make this situation better. That gives them hope. The only real solution that would prevent any of the aforementioned outcomes would be for the dude to alpha up and learn to pass her shit tests. If she nagged, all he'd have to do is use one of the well-established methods to pass the test (one of the skills we learn here at SDMC.)

She would immediately begin to respect him again, and their course would change. He'd have to continue this for a while to rebuild that respect, but it will solve this issue. If he can maintain that same attitude, they'll be just fine indefinitely. She'll once again be aroused by him, put out more (and be more enthusiastic), and they'll return to the state they were at in the beginning.

Unfortunately, that would require him to remove her from that pedestal and see her as a person, which is exceptionally hard for beta males. He measures his self-worth by her approval of him, which creates a vicious cycle because of the repeated failed shit tests. It's not impossible, but it's probable. I would give them about a 3% chance of turning this ship around.