How to Really Stop Bullying 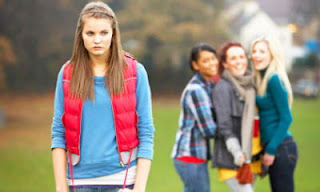 Bullying has always been a topic that interests me. As a kid, I spent a few years being a bully, then a few more years being bullied. Since that time, I've had a handful of people attempt to bully me. As a high school teacher, I witnessed countless incidents of bullying. As a person with a psychology background and a deep fascination of human behavior, I've always been curious about the exact motivations behind the behaviors.

Aside from my own personal interest, bullying exacts a huge social cost in human life. Approximately every 30 minutes, another person commits suicide due to being bullied. That alone should motivate us to take this problem seriously. Hopefully this post will serve as a spark to ignite a wider debate on bullying and maybe, just maybe, lead us to a future where so many people aren't dying.

Yesterday, I asked my Facebook friends why they thought bullies, well, bully. Their responses were about what I expected, and mostly attributed bully to either negative personality characteristics, insecurities and/or an inferiority complex, fear, hatred, unhappiness, mental disorders, emotional immaturity, or they're just perpetuating a bullying cycle (they were bullied, thus they become bullies.)

While I don't discount any of these explanations, none of them really seem to adequately explain the actual bully dynamics. That shouldn't come as a surprise, because science doesn't really understand bullying behavior. All of these explanations are based on logical or emotional inferences, not actual empirical data. When we DO look at the empirical data, we realize we, as a society, have no fucking clue about bullying. Evidence: This study that shows anti-bullying programs actually INCREASE bullying. The authors hypothesize these programs don't stop bullying; they teach bullies to get better at not getting caught. It's the equivalent of showing bank robbers the blueprints for the bank's security systems.

For some of you that may be familiar with anti-bullying programs, you're probably thinking "But wait! I know of programs that work! My school (or my kid's school or whatever) implemented it and it really works!"

Maybe, but odds are good it's a lot like Finland's "successful" program. This program effectively teaches bystanders to overcome the bystander effect and intervene on behalf of the victim. That's actually really effective... at eliminating bully behavior in situation and pushing it to another. It's sort of like how we treat the homeless here in Southern California. They're a nuisance, so municipalities enact programs to force them to move to a neighboring municipality, then they do the same. It does nothing to solve the problem, but it makes people feel good that they "fixed" homelessness because they no longer see them begging on the street corner. Likewise, schools can feel good because they "solved" the bullying program by pushing the problem elsewhere.

I call bullshit. If I'm going to address a problem, I want to actually FIX it. If I'm in a sinking boat, I don't want to devise a better method of shoveling water out of the boat. I want to find the holes and plug them. That's what I want to do with bullying.

Currently, there are a slew of evolutionary psychologists that believe bullying behavior occurs as a function of... big surprise, evolution. They contend bullying behavior is about social domination. In our evolutionary past, bullies would get more resources like food and shelter. Those that were the best at bullying would have access to the greatest quantity of resources, thus most likely to survive long enough to pass their genes to the next generation. As a result, bullying behavior is "hard-wired" into our genes. In the modern world where we really don't have to fight over resources, kids that grow up in a chaotic home environment may not learn the social skills to inhibit this "natural" tendency, so they engage in bullying behavior.

That's problematic on several levels. First, bullying occurs regardless of the stability of home environment and is better predicted by the perceived safety of the environment. For example, bullying behaviors are positively correlated with violence. The more dangerous the environment, the more bullying we see. Interestingly, that only pertains to males (that's a big hint.) Furthermore, males tend to bully other males they don't know very well (another hint.)

What about female bullying? This offers a tantalizing clue, too. First, females engage in far different bullying behaviors than men. Men are direct. They physically and verbally bully each other face-to-face. Women? Not so much. They engage in relational bullying, or, as we like to say, they're catty bitches. They corrupt the relationships of their victims by spreading rumors, leaking secrets, back-stabbing, and using "excluding" behaviors. More significantly, bullying behavior increases as a function of social standing. The popular girls are most likely to bully. Weirdly (to me anyway), this fundamental difference in bullying methodology between the genders is often written off as a minor detail when it should be considered a major hint regarding the real cause of bullying.

So what is the real cause?

Ever watch later elementary and middle school-aged children flirt with each other? It's rough. They have the basics down, but they're WAYYYY over-exaggerated. They just haven't fine-tuned the skill set, and they'll slowly improve throughout high school and into college, with some never really improving on their early fumbling attempts. This flirting behavior serves a useful evolutionary purpose; it's the mechanism we use to attract and secure a mate and eventually pass our genes on to the next generation.

Bullying plays by that same rule. Bullying in children is rough around the edges. It never really stops over the course of our lifetime (yes, there are retirement community bullies.) And, like flirting, bullying serves an evolutionary purpose. Bullying differs in that males and females engage in bullying for very different reasons.

Intermission: If you haven't read it, take a look at my Gender Role Protection Theory and the accompanying "why homophobia exists" post. They'll be referenced in the "male bullying" discussion. Also take a look at the "sexual market value" section of my Women, Explained series. It'll help explain female bullying.

When men bully, they're shit-testing each other to test fitness to "protect the perimeter." In evolutionary terms, men, due to our larger physical size and greater upper body strength, are tasked with protecting the tribe. Part of that task relies on interdependent cooperation. Guys need to know the other guys protecting the perimeter with them are capable of protecting their back, both literally and figuratively. This is why men bully men they don't know well. This is also why standing up to male bullies is the only effective way to stop bulling. This is also why "telling the teacher" or "bystander intervention" just causes the bully to modify their bullying behaviors. This is also why men bully effeminate males (gay males, transgender folks, etc.) so often (read the homophobia post if you skipped it.)

As I mentioned, if the victim fights back, even unsuccessfully, the bullying immediately stops. If they do not fight back, the bulling continues until they do. Sadly, our society has fallen into a trap of being rather militant on teaching boys NOT to fight back. That results in continual bullying until the victim simply snaps (hello, school shooters!)

We can solve that problem by simply teaching boys to stand up to bullies. That will pass the test. Of course, that'll never happen because we love our "we must extinguish any and all toxic masculinity violence" narrative that we mistakenly believe will lead us to a magical Utopia filled with hybrid unicorn dolphins and muffins wrapped in Skittle-flavored rainbows.

Sorry... it's hard to contain my cynicism. Before we move to women, there's one other interesting angle to this. I've had a hard time finding primary sources (unfortunately I was a history major in addition to psych), but there have been some cultures in human history that had a special rule of sorts for biological/genetic men that did not want to "protect the perimeter." They basically got a free pass to opt out of this male shit-testing. Instead of protecting the perimeter, they would do other tasks within the tribe/community. In other words, they weren't bullied because there was no reason to bully them. I have no idea how we could implement this in our modern American society, but it would be a great solution to those men that do not want to conform to the masculine gender role.

This is a lot more difficult problem to solve. Women essentially bully to maintain status as the highest-valued females. Their motive is simple - the highest value females get access to the highest value males. Female bullying disqualifies other potential rival females for access to males. They begin these behaviors before they actually hit puberty for the same reason they start rudimentary flirting behaviors before puberty... complex social skills are hard to learn.

These behaviors are fairly predictable, and includes several behaviors that many feminists somehow manage to blame on men (or the "Patriarchy.) A few examples include:


Honestly, I have no idea how to fix this problem because, at the most basic level, female bullying is one of the engines of evolution. It assures the best genes from the human gene pool are matched up, thus assuring our survival. Short-circuiting that mechanism would doom us genetically. If we were Hell-bent on making it happen, we'd basically have to resort to radical social engineering where women would be forced to reproduce with completely random men. I have a hard time believing anyone (me included) would support that idea.

A victim of female bullying could feasibly take the male approach and stand up to the bullies, but they'd probably have to resort to a scary level of violence to make the bullying stop. Unlike male bullying, female bullying isn't a test. It's the real deal. The females doing the bullying have no incentive to back down until the victim is effectively disqualified from attaining the high value males. To make it worse, female bullying occurs in packs against individuals, so the victim would essentially have to kick the asses of an entire group.

There may be some value in education, though. If a female victim of bullying understands exactly why she is being bullied, maybe she wouldn't take it as personally. That subtle shift in understanding might make the difference between her contemplating suicide and having the strength to persevere. Even if it saved a single life, it would be worthwhile.

Bullying is a serious behavior that harms countless people. Hell, it KILLS a lot of people. As a society, our previous and current attempts to curtail the behaviors have been fruitless. The best we can do now is suppress bullying in a specific environment. To me, that's completely unacceptable because the bullying is still occurring. Is my hypothesis correct? Maybe. Maybe not. But what the Hell do we have to lose?

This post is kind of important. Even if you disagree, we need to start thinking outside the box on this issue. Please share this post far and wide. If you're a parent, grandparent, aunt, or uncle, this issue probably affects the kids you love. If you're a teacher or any other professional that works with children, this issue affects the children you care for so dearly. Hopefully it'll start a new, better dialogue. Post it on Facebook, Twitter, and even Google+. Email it to your coworkers and family members, or print it out and post it in the break room or on the fridge at home. If we spread the word, together we might be able to save some lives.

Posted by Alex Hamilton at 9:44 AM