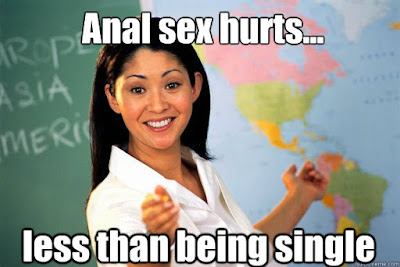 Today's SDMC case study comes from the esteemed website salon.com. If you're unfamiliar, Salon writes drivel that affirms bad lie decisions. This installment about a woman that couldn't tame the bad boy is no exception. Long story short - A woman (Marilyn, though she refers to herself as "Diana" in the story) has several failed relationships, thinks she finds her perfect prince (Liam), she thinks he's going to propose to her but instead asks for butt sex, he's grossed out and dumps her, she eventually finds her "soul mate." They live happily ever-after. It'll help to read the article before moving on.

I couldn't have written a better graphic depiction of hypergamy if I tried... mostly because I'm terrible at fiction. Luckily, Marilyn provides some nice reality. Marilyn is a pretty typical American woman. She's 26 (#4), meaning she most likely just passed her "wall" and her sexual market value is just starting to decline. She starts having sex at slightly later-than-usual age (see #6 above.) She's spent her whole life imagining getting married (#2), and gave her first boyfriend sex with the explicit expectation he'd marry her (#6). This established the pattern of sex being used as a tool to get stuff, specifically a lifelong commitment. She repeated this pattern seven times before Liam, but she displayed emotionally-needy behavior that ended the relationships (#7).

When she met Liam, she perceived him as her perfect man (#11). He was handsome (#3), rich (#10), and had great "game" (#8). In hypergamy terms, Liam is the perfect male... he's alpha as fuck (hot and exciting) AND has great potential as a provider. At 29, Liam was still about six years away from hitting his peak sexual market value (#9). They had been dating for a year, but she couldn't get him to commit even though she had inhibited (not changed) the emotional neediness that sunk her previous relationships (#1 and #13). Realizing she needed to "up her game" to tame the bad boy, Marilyn enlists the help of her sister who used the same value-enhancing formula to land a high-value male (handsome surgeon, #12). Why? She's realizing her peak is or will soon pass, and Liam is perhaps her last chance to land the guy that has it all. She's desperate to cash in her chips and get him to commit.

Short aside - REALLY? This reminds me of my trail running days when I'd run a muddy course and run into the occasional road runner. They'd usually lose their shit (heh) because their shiny new Nike Waffle Racers would get a little muddy. What the fuck did you expect? It's a god damned muddy trail!!!! Rule of thumb, guys. If you're engaging in unplanned anal, she ain't got time to thoroughly clean the pipes. If you can't handle a little poo, stay out of the butt. Or just wear a condom. I seriously question this dude's abilities as an executive. Anyway...

Odds are good Liam is acutely aware of his own sexual market value. As a hot, rich dude in NYC, he pretty much has his pick of the litter. It's not surprising he ends it for a seemingly trivial reason. He has a lot of other options, many better than Marilyn. Harsh, but true.

After he doesn't call, she spends a few weeks sulking, then swears off high-value alpha males (#16). This is a very explicit example of a woman hitting the aforementioned "wall" where they become aware of their diminishing value on the sexual market. That signals the need for a new strategy to land a provider to satisfy the provisioning side of hypergamy. Per the usual, she rationalizes this as "growing up."

So she moves across the country and meets Jeff. As evident by her description, Jeff is a total emotionally-needy beta male that's willing to place her on a pedestal. He ignores all her faults out of fear of losing her affirmations (#17). Liam provided a hard slap of reality - she no longer had the value to get a man like Liam to commit, so she needed something safe. Jeff may not be handsome, rich, or exciting, but he's safe. Marilyn went for a low-value male because she can't get a high-value male to commit because she's not high enough value herself. For what it's worth, Liam would probably need a ridiculously high value woman to get him to commit.

This one is easy. Jeff and Marilyn will have a good few years. Jeff will be on cloud-nine; he's probably been friendzoned his entire post-puberty life. He'll be getting the regular sex he's never had and he'll buy into the idea that Marilyn is his soulmate... that one special snowflake that has finally confirmed that, in the end, the nice guy really does get the girl. He'll do everything for her. Except, of course, stand up to her. And make decisions. He's psychologically incapable of rocking the pussy boat. That's precisely what makes him so safe. There's a pretty decent chance Jeff is actually an emotionally-manipulative "Nice Guy" that falls into the pattern of classifying women as "Chicks I hope to fuck" or "cunts that have rejected me."

They'll probably have a kid or two. Their frequent, relatively decent sex will slow down dramatically. Marilyn will focus on the kids and start treating Jeff for the chump he is. She'll deliver shit tests, which he will reliably fail. With each one, his value drops lower and lower in Marilyn's eyes. Eventually she will have lost what little respect she had for him as a man, which will effectively kill any and all arousal she may have felt. Bring on the maintenance sex!

Jeff will wonder when their sex life, which he believes was the best she's ever had, will pick back up. He won't be aware that Marilyn had a lot hotter sex with her previous alphas... and she's keeping quiet about that one. Except Liam's butt sex, of course. Thanks Salon! He'll start trying harder and harder to rekindle their past passion. He'll double down and become even more compliant, do more chores, do more romantic gestures, even hone his skills as a lover. In short, he'll become even more beta. He'll bend to her every whim. Eventually he'll start to feel resentful for the fact that he's trying so hard but getting none of the affirmations (and sex) he feels he deserves. That resentfulness will eventually make Jeff susceptible to another woman that may come along and offer the love, affection, and, most importantly, hot sex he needs and isn't getting from his supposed soulmate.

Marilyn, unfortunately, will be blind to all of these undercurrents that have been dictated by her biology. She will believe exactly what she wrote in this article - she married her best friend. She won't make the connection that Jeff doesn't arouse her like Liam (or the other seven dudes before him) did because he's not enough of a man. She'll blame herself instead. She'll have some arousal for the honeymoon period of the relationship due to the sexual novelty, but it'll quickly fade. She'll blame her eventual lack of arousal (and inhibitions) on being too tired from taking care of the kids, her writing career, or, worse, a medical problem. She'll WANT to give Jeff the sex he so desperately craves, but she'll learn she can't will herself to desire him. Eventually she'll start fantasizing about the hot alphas she used to fuck, which may lead her to start developing a wandering eye. That alpha-craving side of her hypergamy will make her susceptible to the alpha pickup artists that give lonely women married to betas what they need - a good, hard, fucking.

They'll either divorce after 5-10 years (most likely scenario) or somehow muster the resolve to "stay together for the kids" (if they decide to have some) and ride it out until the kids are old enough to survive the scars of divorce.

And that, kids, is how most modern American relationships work.

The only real hope is for Jeff to man-up (assuming they're not past the point of no return.) Quite literally, he has to learn to be better at being a man. He needs to make himself into the alpha male his wife craves. That will trigger her dormant desire. Jeff probably thinks he's getting the best sex she could give because he believes women can voluntarily control desire and he is, after all, her best friend. He doesn't understand the passion and intimacy paradox, but he would after manning up.

If he does this, he'll eventually earn the respect Marilyn never had for him by passing her shit tests. With each one, her desire for him will grow. If he learns to effectively alternate passion and intimacy (like I discuss in No Bone Zone), they'll start having more frequent, uninhibited sex AND a deeper emotional connection.

If Jeff becomes the alpha his wife craves without turning her into the enemy (i.e. - still maintaining the loyalty that made him such a good-boy beta) they'll both be on the royal road to long-term happiness. He will no longer need her constant affirmations and sex which, ironically, will provide him with more of both. She will no longer crave that alpha cock because she's getting it along with his loyal provisioning and protection. She will finally have that prince she thought she had in Liam years before.

Posted by Alex Hamilton at 6:44 AM