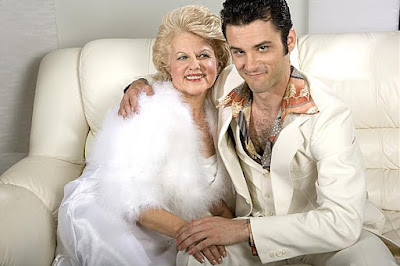 This case study came from the saddest place on the Internet: Reddit's "DeadBedroom" sub-reddit. This specific case caught my eye because it's becoming a fairly common scenario in our modern dating and relationship landscape. Given Reddit's current upheavals, the full text of this post is located at the end of this case study in case they disappear.

This is a textbook case of a younger (see #3 above) higher-value male (#7 and #12) falling for a woman that had hit the proverbial "wall" of her sexual market value and was trending downward (#2.) His value will continue to rise until about the age of 35; her value will continue to plummet. That discrepancy will never equalize.

Odds are good he hooked up with her because she was experienced, attractive, and loads of fun. She would have been the one pushing for an exclusive long-term relationship in an attempt to satisfy both of her hypergamy desires. She hooked up with him because he was her "cashing in the chips" man. She was 29 when they met, which means she was already a few years past her peak ability to attract the highest-value males. She had to latch on to the best man she could get because she realized the quality of man she could attract was decreasing by the day. She would have perceived him as a "catch" because he was desired by other women and had the work ethic of a great provider. Her friends were probably envious.

They've been together five years (#1), had typical honeymoon sex (#5), which predictably died out after 2-3 years (#6.) Odds are good he was very alpha in the beginning, but failed her shit tests because he was petrified of losing her (he probably thought of her as his soul mate.) He puts her on a pedestal and minimizes her serious faults (#15.) He probably lets her make most of the decisions and has trouble asking for what he needs. He relies on her for emotional support (#4) so he probably reveals a lot of weaknesses. That lowered his value as an alpha, which dried up her vagina.

When the 'gina tingles stop, advertising sex and liberal displays of affection gives way to maintenance sex and a lack of affection (#8 and #10.) He's addressed the issue, which probably induced some guilt sex for a few weeks because she was afraid he'd leave (#11.) Out of desperation and unable to understand she's simply not sexually aroused by his beta personality, she sought out the help of her gynecologist. Repeatedly (#9.) Odds are good he's tried all sorts of things like romantic gestures, doing an excessive number of chores, buying lingerie, trying to hone his sexual techniques to give her more orgasms, and probably an embarrassing amount of begging and pleading. It was probably just effective enough to keep him from changing.

She's probably pushing for a kid (#13) because she's getting to that point where fertility decreases exponentially every year. He correctly understands the implications, hence the reason he wrote the post (#14.) He is not, however, familiar with the "war bride" phenomenon. She could get over him immediately if she could find an adequate replacement.

This is a really bad situation for the dude. Even though it's crystal clear she has zero sexual desire for him, she keeps him around because he's a reliable and (for now) loyal provider for the baby she hopes to have. If he leaves, he'll feel bad for a while, but he'll get over it and find his market value will allow him to land a WAY more valuable woman.

If he tries to leave her, she'll cling to him like nobody's business. Her value is low and dropping fast. But his is high (as a provider, anyway.) THAT is why she keeps him around. If he did leave (or even threaten to leave), she'd immediately and forcefully bust out the advertising sex. That would keep him around long enough to get pregnant and convince him she's "changed." Of course, once the baby is born, she'll have the legal grounds for child support and no longer have a need to keep him around. Since he's so beta and doesn't recognize that's the source of her lack of desire, she'll likely break up with him and seek out some sexually-arousing bad boy "cougar-loving" alpha cock. Or she'll stay with him (especially if he's a good daddy) and just join Ashley Madison to find those delicious alphas she craves.

If he stays and fails to change, he'll experience the exact same scenario as the last paragraph except he won't get that "I'm afraid you're going to leave" brief period of advertising sex.

This one is much trickier than the first case study. All that dude had to do was alpha up and his problems would be solved. This dude doesn't have the luxury. If he did become the alpha that made her panties wet and knocked her off the pedestal, he'd still have the issue of value. He is and will be worth more and more on the open market, whereas she'll be worth less and less. Normally that leads to excellent long-term relationship stability, but their value might be so great he'll realize he can do far better. Right now he's blinded by his desperate need for her approval via affection and hot sex, but going alpha destroys that illusion.

And her reality is pretty... well, not pretty. She's well past her prime and has a mood disorder. That could be overlooked, but he'd start getting positive attention from other significantly higher-valued females. That would be really tempting, but he'd probably have already had a kid with her. He'd either be trapped with a woman below his value or leave and lose a chunk of cash and, likely, custody of his kid.

Considering all that - my advice would be to leave right now. Today. Stay single for a while and re-establish that alpha-ness he lost early in their relationship. Get some male friends. Play the field a bit. Don't be in a hurry to settle down; maybe juggle a few casual friends-with-benefits relationships for a while.

To do this, he would have to anticipate the advertising sex, and prepare to reject it. That'll probably be impossible because that's the one thing he desperately wants, and she's the center of his universe. I honestly doubt he's strong enough, though. The potential for steamy sex would bring back too many good feelz from their honeymoon period.

[throwaway acc - bc she also checks reddit] apparently this is a more appropriate forum. sorry. didn't know :(
We have been together for 5 years, since I was 24 (she was 29).
At first, as always everything was amazing, and to this day she is still my closest friend and in almost all aspects my only confidant. We used to have really fun sex, and she was definitely not frugal when it came to giving in the bedroom. I love oral too but she never really wanted to receive it herself - which bummed me out a bit, but I got over it, i think :) All in all we'd fuck for a few 'rounds' at a time.
Somewhere in the 2nd or 3rd year of our relationship, the sex slowed down from a few times a week to a few times a month, to going for two or three months without us getting anywhere. Which is incredibly frustrating as I had a very active sex life before we met. She just seems like she's not enjoying it, or even in discomfort - and a dozen trips to the Gyno havent brought us any closer to an answer.
In the end, it felt like when we (rarely) have sex, she's taking one for our relationship
Affection seemed to dry up a bit too, as we settled into a very routine life or work, home, dinner, sleep... albeit constantly sprinkled wih nice dinners, fancy parties, exotic travelling.. etc (but still no sex)
We have a talk every year about how slow things have gotten, and we kick it up for a couple of weeks, but almost immediately, it dies down again to once every other month.
I have a very stressful, long hour job - her's is equally as stressful but half the hours, and so she ends up waiting at home, alone for me, cooking, cleaning etc - doing all the things I'm very grateful for (but can equally pay someone to do) - and so at first we blamed it on our jobs, and the city we were living in (London) - so we took a risk and packed up everything and went travelling. We've been in Caribbean Islands, Costa Rican Highlands, Wine farms and everything in between - as aphrodisiac as geography gets...
But, alas, we're still in the same position (albeit 10,000 miles from home).
Here's my angst:
It seems really immature / irresponsible the fact I'm holding both our futures hostage at this critical junction in time, but I can't get over the fact that my peak sexual years were near celibate and not sure that's a good thing going forward.
So, although we love each other dearly, as two people who have lived in eachother's pockets for years do - and the thought of us hurting eachother in any way, shape of form makes me wince - I'm not sure if I can do this dead bedroom thing forever.
Question is : have I backed myself into a corner and left it too late to break? Or is there a way this might work? should I just suck it up and be happy with my lot? Shall I give her kids and expect a divorce in 20 odd years? I'm at a loss :( :(
Posted by Alex Hamilton at 10:18 AM