Can't Get That Guy to Commit? Here's the Trick, Ladies

Yesterday, I had an interesting conversation on my Facebook wall about guys that do not commit. The discussion was based around this article where one friend is chastising another for hooking up with a dude that's not interested in commitment. She then claimed to not criticize hookup culture, then went on a long diatribe about hookup culture and how it has replaced "dating."

Here's the deal, ladies. As I explained in the Ladder Theory post, dudes have two ladders they place women on - the "Marriage Material" ladder and the "Fuckable" ladder. Generally speaking, almost all women land on the "Fuckable" ladder by default. Give a dude some alcohol and privacy (nobody finds out) and our "fuckable" standards typically drop pretty low, especially for a one-night stand. Slightly higher value females may become fuck-buddies (meet up for sex on an ongoing basis) If the woman is somewhat higher value (fun and/or decently hot), he may desire a friends with benefits arrangement (meet up for sex and nonsexual things, but avoid exclusivity and a deep emotional connection.)

Generally speaking, most higher value dudes (alphas) are going to resist committing to women because they have options. Their abundance mentality gives them the freedom of being able to wait to commit until a very high value woman comes along. This is why they resist committing to one-night stands, fuckbuddies, or friends with benefits... they're just not good enough relative to the caliber of women that one particular dude can attract.

The problem the author of the Elite Daily article seemed to ignore is the fact that women aren't simply entitled to have access to exclusive relationships with high value men. The comments from my Facebook discussion echoed this "entitlement" sentiment. Some women seemed to be genuinely offended (with one even tossing out a "misogyny" claim) at the idea that men can and do reject women because they're not good enough. Believe it or not, guys have standards. The standards for "willing to have sex with this woman" are significantly lower than "willing to commit to this woman", and that entry into relationships is controlled by men.

So what is a girl to do? Here are some options: 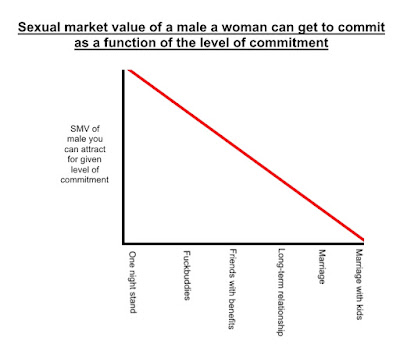 In other words, the lower the commitment, the higher the value of the male a woman can attract. When a woman improves herself, she improves her ability to attract higher value males at all points on the graph above. What exactly do women need to "improve" to attract a higher value mate? If you're interested in a low or no-commitment relationship (just sex), improvement should focus on becoming more physically attractive and be more overtly sexual. If you're interested in securing a higher value male for a long-term relationship, improve physical attractiveness and be more overtly sexual, but also work on the personality traits of exuding trust, loyalty, admiration, and respect. Basically work on the things men want in a high value woman. Specific dudes may have other qualities they're searching for, but these are the universals that'll work for all men.

These discussions get a little weird because a lot of women really oppose the idea that a woman should have to improve to "land a man." That's the reason I mentioned option #1. Women shouldn't have to improve to land a man. However, if you're unhappy with your prospects OR are hooking up with a dude that is resisting commitment, improving yourself is the only solution.

As an example, the woman pictured on the left would have a lot more options after she became more fit in the picture on the right. 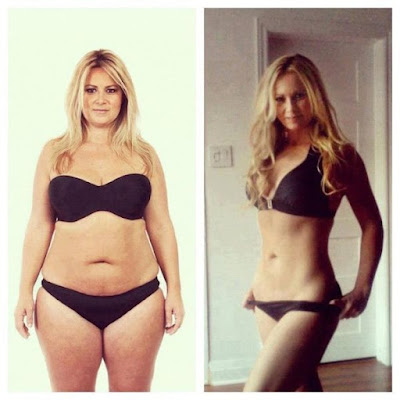 Women sometimes fall into a trap of believing they have to improve qualities that simply don't matter all that much. As I discussed in this post, things like status, power, and wealth rarely if ever increase a female's value on the sexual market. In fact, it may even be harmful. This is a concept that hasn't been researched enough to fully understand, but high-earning women end up less satisfied in relationships and divorce more frequently.

I don't think this trend is a good thing. From a logical standpoint, it doesn't feel "right" that a woman hurts her opportunities in relationships by improving her socioeconomic status, but it is what it is. My hope - once we drop the silly idea that gender roles are social constructs and not biologically-mandated, we can start exploring the real dynamics behind this phenomenon.

Anyway, if you want to improve the caliber of men you can attract and get to commit, it requires improving yourself. If you're overweight, lose weight by eating less and moving more. Dress in more flattering, stylish clothes. Hone your cosmetics application skills. Study seductive feminine posture, body language, and communication patterns. Hone your flirting skills. If you're interested in a relationship, get better at the things men are looking for in a high value mate. None of this is easy, which is the reason so few women ever try. But hard work pays off.

Have a question or comment? Leave it in the comments section!