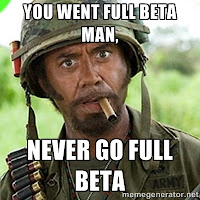 In the first post of the series, I introduced the four types of beta relationships. In the second post, I talked about how to spice up boring but otherwise healthy marriages. In the third post, I discussed fixing relationships where the dude was once an alpha, but she tamed him into a passive beta. Both of those scenarios aren't all that serious and the fix is fairly easy.

Today's relationship pattern is a little more complex. And a lot harder to "fix." What happens when a dude has been a beta his entire life, entered into a relationship as a beta, and has continued that beta trend? Before we get to the discussion on relationships, let's explore exactly what we mean by a "beta."

In the San Diego Man Camp, we've started using the following operational definitions for the terminology we use:

Sometimes men are "betas" in every art of their lives; sometimes they're "betas" only around women. In the case of the former, fixing the problem is a little more time-consuming because there's no frame of reference. These men are always searching for affirmations from others, avoid risks, cannot take criticism, tends to be needy and overly emotional, and has a tendency to use guilt and shame to manipulate others.

In the case of the latter, learning to be "alpha" is usually simply a matter of doing what you do outside relationships inside relationships. When they're not dealing with women, these men are confident, assertive, and decisive. With women, they exhibit all the beta traits listed above and in the linked posts.

Most of the guys that fit this scenario fall into a predictable pattern. Most did not have a strong male role model to display masculine traits. They were raised by single moms or by fathers that had strong beta tendencies. At some point on their youth, they failed to learn about the nature of women. In many cases, they learned about "what women want" from women themselves. As a result, they place women on a pedestal and treat them like princesses instead of, well, people. They are willing to do anything and everything for women because they believe women will then reciprocate and meet all their needs. In essence, they believe they can put "niceness" coins in and get sex and love in return.

The women that initiate relationships with betas meet pretty pretty predictable criteria. In our modern American society, the vast majority of these women have passed "the wall" (the point where they become aware that their sexual market value is decreasing) and realize they can no longer attract Alpha Males for commitment. They can still land Bad Boys, but they have no desire to commit. As such, they "grow tired of games" (which is code for "these bad boys refuse to be monogamous with me") and go through a process of "maturing."

That causes them to look for the opposite of the fun and exciting (and sexually arousing) Bad Boy - the beta male. The woman appeals to the beta because, in his mind, his "nice guy" game finally paid off. He finally beat the "alpha assholes" that have been stealing his crushes since puberty. Alas, it's just an illusion. Once the honeymoon period wears off, she will fall into the beta wife trap and their relationship will meet a predictable end.

So How is the Problem Solved?

Most of the guys in this scenario follow a very predictable "Nice Guy" pattern which is exceptionally hard to overcome, especially quickly. This is going to be a long, slow process. Also, there's less of a guarantee the beta wife will want to be with him if he makes these changes. Actually, it's more likely HE will increase his value enough to start attracting the attention of much higher value females and he'll be tempted to seek out greener pastures. This effect is slightly negated by the "passive dread game effect" where women will sense her mate's new-found popularity with the opposite sex and begin giving him advertising sex AND start increasing her own value.

Sidebar - a lot of guys ask me for ideas to convince their wives to do all kinds of things, the two most common being "lose weight and exercise" and "initiate/ be more passionate/ have fewer inhibitions when having sex." The simplest method - increase your own value.

Okay, so what's the process to make this situation better? Like the other scenarios, education is going to play a major role in the transformation. Unlike the other scenarios, this is a difficult journey if you're going solo. You'll have A LOT more success if you have a mentor or mentors that has been through the process. If you don't know any reformed betas, check out our Facebook page. Most of us have are are going through this process; it's an excellent resource for support and guidance.

These posts provide a good framework for the rest of the reading you'll be doing. Once you get through these posts, read the following books in this order. They will provide a more in-depth analysis of the things discussed in my posts above.

Once you've digested all of these sources, you'll have an excellent frame of reference to a) identify your beta behaviors, b) understand why they're causing damage, and c) have effective alternatives. Odds are good your relationship is in a precariously bad spot. She does not respect you or find you attractive. One or both of you may have considered or is actively having an affair. You may either fight frequently or live in a state of perpetual apathy. You're more like roommates than lovers.

If you're reading this, I'm working off the assumption that you're interested in saving the relationship. In many cases, this happens because divorce may break up the family (if you have kids) or both of you may take a significant lifestyle hit if you lose your combined income. However, there's a chance SHE may not be interested in continuing the relationship. In the alpha-turned-beta situation I discussed in the last post, her first impression of him was that of an "alpha." When he starts improving, she's getting the man she fell for at the beginning of the relationship. When a dude starts as a beta, it's really hard to change that initial impression. He's becoming a fundamentally different man. Most women would love that change, but some are too insecure and need their men to act like whipped dogs.

Be aware that this process will make your life better, but that "better" may mean your current relationship ends. For the beta male, that's a terrifying thought. However, the new you will attract far more valuable women. If she doesn't want you, it's her loss. So... the process:

As you can see, the process is fundamentally the same as the other situations, only the time frame changes. The first two scenarios can usually be rectified in a few months. This process? It may take anywhere from six months to several years. It took me over a decade to complete this process, but I had zero guidance, had no idea what the end goal looked like, and did everything via trial and error. If I would have had these resources at my fingertips, I could have saved years and years of struggle and have spent a lot more time actually enjoying life. Helping others save time in this process is the reason I do what I do here.

Anyway, in the next post, we'll tackle the most challenging scenario - The Graveyard Marriage. These are beta marriages that are essentially hanging by a thread and one or both people are desperate to save it but have zero answers. Hopefully the next post will give those folks a glimmer of hope.