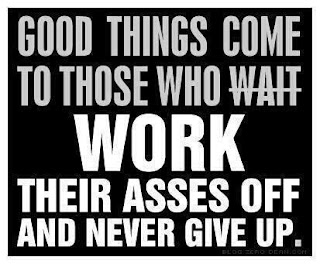 One of the defining characteristics of masculinity is that it's earned. It cannot be given away for free. Furthermore, masculinity is hard work. That hard work, however, is repaid with a cornucopia of rewards. A man that relentlessly seeks self-improvement raises his value, and that value allows him to attract a much larger pool of quality, high value women, earns the respect and friendship of his fellow men, allows him to assume leadership roles in his community and profession, and allows him to reach the pinnacle of the male sociocultural pecking order. Alphas get what they want out of life because society rewards them for their hard work and sacrifice.

This is the reason so many modern beta males are fighting to "redefine" masculinity. Being a beta male is really easy. It's comfortable. It's safe. No risk, but no reward. Beta men only get the girls looking for a loyal provider. They don't get respect. They don't get to make decisions. They're the butt of jokes and targets of bullying. They don't get the promotions at work. They don't have a large network of male friends. The men that aren't willing to do the hard work to become a man feel a sense of entitlement to the spoils other men have to earn, but it doesn't work that way. You don't get to demand that you be given honor. You have to earn honor.

When I discuss beta males on Facebook (like when I posted this post about the caveats of being a beta), I get a lot of interesting but predictable responses from beta males. For any man making the decision to start working to get better at being a man, they'll encounter these reactions from beta males. Understand - betas have to disparage alphas because alpha success is direct, obvious proof that being an alpha results in more positive life outcomes than being a beta. These responses alleviate the cognitive dissonance that results from the beta clinging to a life strategy they've chosen. They have two options - rationalize their beta-ness or change their beta behaviors to alpha behaviors. Here are a few common responses:


For males currently caught in the beta mindset that want to change, this blow-back from other beta males can be discouraging. They start making some very simple changes and see immediate results. Betas that are secretly unhappy, due to either envy or a need to continue their delusion that being a beta results in better outcomes, need to attempt to drag the budding alpha back down.

It's worth noting that I've met betas that are completely happy with their beta status. Those dudes? I give them a hearty thumbs-up and encourage them to keep following their path. Being a beta does have some advantages mostly related to ease and comfort. If a dude is aware of the negative consequences and still chooses the beta lifestyle, that's perfectly acceptable. Those aren't the betas that will try to drag aspiring alphas down, though.

Getting better at being a man is hard work. But it's worth it. When you take the journey, there will be detractors and they'll use some pretty predictable methods to shame you back to beta status. Hold strong, brothers. Their actions aren't based on an understanding of objective reality. Their behaviors are based on a fantasy they've willingly and enthusiastically embraced.