In yesterday's post, I talked about male-female friendships mostly from the perspective of males. Now I'd like to shift to focusing on females and how they view friendships with us. First, it's important to understand one critical point - when you first meet a woman in real life (I doubt online interactions count), she's going to make an impression of you based on some fairly obvious criteria. As a result of that first meeting, she's going to place you on one of two ladders - the "Real Ladder" or the "Friends Ladder."

If you're placed on the Real Ladder, she's sexually attracted to you. That means she would not only be willing to hook up with you, but also sees you as potential relationship material. Read the linked post in the last paragraph for a more detailed explanation.

If you're placed on the Friends Ladder, she is not sexually attracted to you. If she doesn't immediately reject you and keeps you around, you will forever be in her Friendzone (there are exceptions in the same linked post.)

The Idea of Orbiters

In the last post, I mentioned "Orbiters." If you've been placed on her Friends Ladder, you are an Orbiter. Orbiters are the dudes that voluntarily occupy a woman's friendzone. They stay there because, per their mating strategy, they sincerely believe being a woman's friend allows them the opportunity to demonstrate their value by treating the woman like a princess. They don't understand that placing a woman on a pedestal is the worst way to increase a woman's sexual desire. Still, they persist. 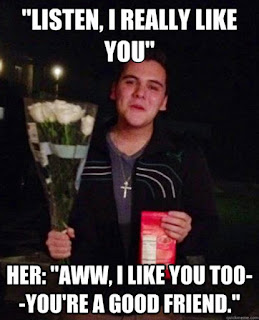 Women with orbiters are often accused, usually unfairly, of "leading men on." I don't buy into that because most women genuinely believe the dudes are entirely platonic friends. It's the men that set up the "if I'm nice, you'll reciprocate with affection and/or sex" expectation. Still, women usually maintain the friendship because it often provides a tangible benefit. Some of these benefits may include:


It was kind of tough deciding which memes to share as part of this post, so I'll just go with this one: 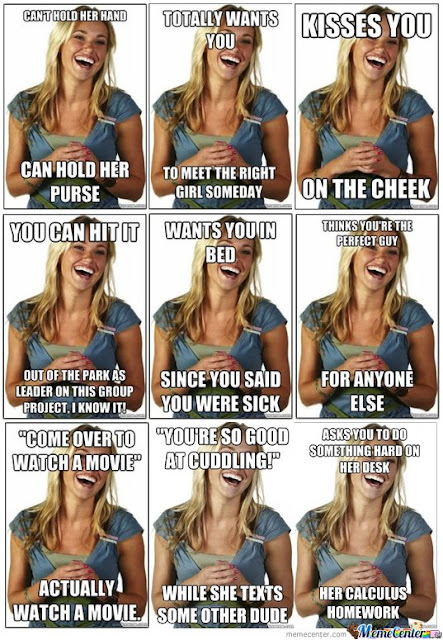 If you were nodding at any of those, you might want to consider joining our Facebook group...


What About "Friends with Benefits?"

Ah, friends with benefits. Too many dudes look at that construct and conflate it with Orbiters. If you're friends with a woman and she's fucking you, you're not on her Friend Ladder. You're on her Real Ladder. Congrats! In fact, she would be considered a Plate. Women like sex just as much as guys (though their actual sex drive isn't as strong unless they're ovulating.)

What makes women different is they don't desire to fuck almost anything like guys do. Blame evolution for that one... the cost of fucking a low-value loser, given the rigors and dangers of pregnancy, birth, and the subsequent child-rearing is FAR greater for a woman than a man. As such, men rarely if ever experience sexual revulsion. Women, however, DO experience sexual revulsion. THAT is what separates their Real and Friend Ladders. Being sexual with someone on their Friend Ladder would be like licking the toilet bowl in the Taco Bell bathroom on a Saturday night.

The moral of the story - Orbiters and Friends with Benefits are completely different constructs to a woman.

This is an excellent skill men can use to assess a woman's value, especially as a potential long-term partner. Women are excellent at assessing men; that's the whole point of shit tests. However, since a great deal of female value is visual, the only other thing we're pretty good at is assessing if she'll likely have sex with us in a timely fashion. We're kinda bad at assessing her suitability for a long-term relationship, so we usually rely on advice like this:

This video, by the way, isn't necessarily incorrect. ;-)

Anyway, assessing a woman's friendship patterns with both men and women can offer A LOT of insight to a particular woman's personality (and suitability for long-term relationships.)

Run for the Fucking Hills!

Females have two kinds of male friends: Orbiters on her Friends Ladder and "guys I'd fuck" on her Real Ladder. Once you're on the Friends Ladder, you're not getting to the Real Ladder because she's sexually-repulsed by you. Orbits are NOT Friends with Benefits. Once you understand these points, you can then use the information to assess a woman's potential for a long-term relationship. Good luck, gentlemen!