How Women Choose Their Men and the Importance of First Impressions

I've spent A LOT of time blogging about the ins and out of female behavior with most details coming from the multi-part "Women, Explained" series over at my Sexpressionists blog. Still, I've never given my male readership a good explanation of exactly how women choose men based on their value, whether they're being picked for a random hookup or a long-term relationship.

Worry not, gents! Here ya go.

The following graph depicts how a woman makes her decisions. For the ladies reading this - I know, I know. You don't like when we strip away the flowery rationalizations that create that facade of mystery around how and why you do the things you do, but this is helpful to us dudes. We don't speak your language, and your advice always leads us to do stupid shit (like adopt a girly-man persona because you said you like men that are "in touch with their feelings.") I'm making better men here at the San Diego Man Camp. Trust me, I know what I'm doing. ;-) 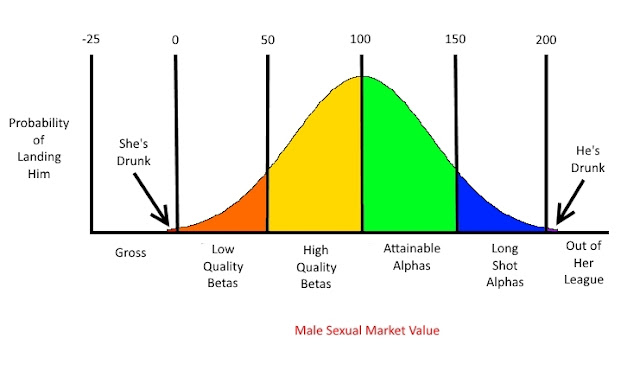 The "X" axis represents a man's sexual market value. This is comprised of the universal characteristics of physical attractiveness, game (aka "a confident, charming personality"), and socioeconomic status. This may also include personal preferences that vary from woman to woman (hair style, tattoos, beards... whatever.) The numbers at the top are added to make the explanations easier, and moving right represents a higher value male. The "Y" axis represents a woman's probability of success with a male at any point on the X axis.

The mid-point of the graph (100) is the starting point. Whenever a woman meets a new man, she places him somewhere on the graph based on her first impressions. This is mostly based on physical appearance, but posture, body language, and the first few spoken words matter, too. That first impression is critically important because it is difficult to change. The more she gets to know the guy (assuming he survives the first impression), the more she'll adjust the score to account for a host of other factors depending on how he manages shit tests, such as:
How much each of these (and other unlisted variables) affects a man's perceived sexual market value depends on the specific woman. The key take-away: That initial value is critically important because you'll spend the rest of the night (or life if you marry her) with that as your default position. Anything and everything you do will change your value relative to that point.

Let's say a hypothetical woman, Julie, is at a music festival. Julie is a fairly attractive woman in her early 20's and would be considered a "7 out of 10." She's approached by two men at different times, Jack and Hal. Jack is a short, slightly chubby male with thinning hair. Hal is tall, fit, and has striking facial features.

When Jack first approaches Julie, she initially gives him a score of "50" (per the graph) based on his appearance. Within seconds, however, Jack opens with a witty comment about the pattern on her scarf looking like his grandma's couch. He says it with a playful smile and a wink. His confidence is readily apparent to the point where Julie immediately wonders if he's a player. Intrigued, she begins chatting with him. Very early on, she asks him if he's this friendly to all the girls (a shit test.) Jack responds with "Of course, you're the fifth girl I've seen today with that exact same scarf!" During the conversation, Jack casually mentions he's a vice president for a local tech startup, and he's building his own tech business on the side. Jack clearly has game and demonstrates high value. Julie's very first score shoots up a full 100 points. He leaves before she's ready to part ways because he has to meet up with his nephew, but gets her phone number. That score of 150 will be the score Julie will forever use as Jack's initial value. Everything he does from that point on will raise or lower that score.

Later, Hal approaches Julie. The dude is a hottie; Julie is somewhat surprised he notices her. Her very first assessment is he's a "175" which would normally be "out of her league." That bubble is quickly burst, however, when Hal starts talking. He looks down at the ground and mumbles something about how beautiful she is. He crosses his arms and fidgets a lot as he begins asking Julie questions about where she works and where she grew up. Sensing his supreme social awkwardness and lack of confidence, Julie's initial score drops to about 125 (he IS still hot, after all.) He then goes on to mention that he's a part-time cashier at the local 7-11 and spends most of his spare time playing Call of Duty in his mom's basement. Julie devalues him all the way down to 50. He leaves by awkwardly giving her his phone number even though she didn't ask. His score of 50 will be his initial score she'll use to value him in the future (she might consider a date given his appearance is worth the gamble.)

If we had two hypothetical Julies and one married each of these men, that initial valuation would influence how the relationship progresses. Julie would try to "tame" Jack's alpha tendencies, which would lower his score. If he was well-versed in passing shit tests, he'd maintain or even increase that initial score of 150 which would assure Julie believed she had a high value mate. That would lead to a stable, happy relationship.

Hal, on the other hand, would forever start from that "mid-beta" position. Even if he "manned up" and started acting like an alpha, his value would increase from that initial "50" score. He would have to work exceptionally hard to even get to that break-even point of 100. Odds are good this marriage would take the same trajectory I describe in this post, and Julie's experiences would follow this path.

In my own current marriage, I was a bit lucky. Due to extenuating circumstances, I entered the the relationship as a high value alpha. Then went full-on beta. Because I started as an alpha, it's been relatively easy to re-establish. In my first marriage, I never "manned up." I ended it as soon as it got to the "bitching and nagging" phase, but it was heading for the exact trajectory discussed above.

In the near future, I'll talk about this graph a little more. There are all kinds of interesting dynamics at play that deserve more attention. The real take-away:

It's important to start relationships with as high of a value as possible.

Starting a relationship as an alpha and maintaining that status is probably the best best. Starting as a beta? We know how that typically ends, and it's an uphill battle to avoid that fate.

Posted by Alex Hamilton at 3:17 AM