I've had a few people ask to explain my take, in light of my last article on the biological basis of gender, on the nuanced gray areas of human diversity. Specifically, what's my take on gender and how it relates to biological sex (the presence of ovaries, testes, and external genitalia), genetic sex (what combination of "X" and "Y" chromosomes you have), sexual orientation (ala the Kinsey Scale), and sex drive (high libido versus low libido.)

All of this tends to get confusing because humans don't simply come in the four flavors I use for discussion purposes, which are usually manly men, effeminate men, masculine women, and girly women. The divisions I use intentionally ignore all that gray area because I'm more interested explaining the basic concepts in a concise manner. After learning the basic concepts, then people can apply them to their particular individual experience by adjusting to accommodate diversity.

In the previous post, I discussed the biological foundation of gender. Before I tackle that, let's address "sex." While we like to think of "sex" as a simple, discrete category consisting of "boy" and "girl", it's actually really complex. "Sex" refers to a person's biology, which consists of five different factors:


All five of these variables can be combined in a variety of ways. There are actually a lot of combinations here. For brevity's sake, I'm taking the lazy route and linking to the Wikipedia article for those that are interested in the specifics. The key for our purposes - that boy/girl category has a whole lotta ambiguity.

In the post from yesterday, I discussed the fact that "gender" was biological. Like "sex", gender is usually simplified into two discrete categories - masculine and feminine. Like sex, gender isn't that simple. I like to describe it as a graph where the "X" axis is a measure of masculine and the "Y" axis represents feminine. It looks like this: 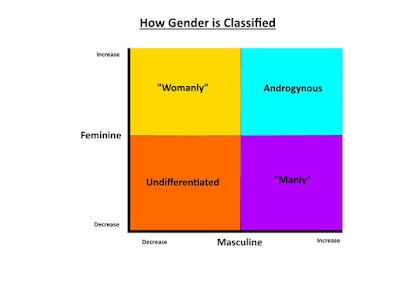 A person that exhibits both strong masculine gender characteristics AND strong feminine characteristics would be considered "androgynous." If both are very low, we'd call them "undifferentiated."

The key to this graph - gender can operate entirely independently of all the variations of sex listed in that first section.

My official stance on this issue is equally simple: People need to be allowed to express gender however they feel is most "natural", with natural being whatever feels right. The most obvious example of this would be a transgendered person. I'll use our famous example that's been in the news - Caitlyn Jenner. She was born a man and lived her entire life as a man. It wasn't until she was sixty-five that she made the decision to live as a women despite having identified as a woman her entire life. In my perfect Utopia, Caitlyn would have the freedom to have lived as a woman from the earliest age where she could have expressed female gender behaviors.

The San Diego Man Camp project is designed to help promote and educate about masculine thoughts and behavior for those that identify with the masculine gender role. I use the term "men" all the time, but as I mention in the FAQ on this site, we're welcoming of any variation of "sex" that identifies with the masculine gender role. Part of our mission is to do what we can to create a world where an individual like Caitlyn has the freedom to express her "natural" gender.

Caitlyn CAN (and did) live most of her life as Olympic hero Bruce, but she was living a lie. Like I stated in my own story of suppressing my "alpha-ness" in favor of "beta-ness" because that's what people told me I was supposed to do, we need to support and encourage everyone to be true to their real self. Living MY lie was probably a lot easier than it was for Caitlyn to live her lie, but it still sucked balls.

This is also why I get so pissy with many variations of modern feminism.

First, some actively reject transsexuals (cough cough RadFems cough), which to me is akin to burning crosses and carting women and children off to take a Zykon-B "shower." That's a KKK and Nazi reference for my readers that aren't history dorks. ;-)


Second, they actively vilify the masculine gender role, which is the same idea. It's thinly-veiled hate based on denying people the right to express the gender they were born with. To me, this is simply unacceptable and I refuse to support their stance and will actively fight it. Accepting diversity means accepting diversity. Gender EQUALITY means gender EQUALITY.

In this graph, sexual orientation is plotted on the "X" axis and can be measured from "totally homosexual" to "totally heterosexual." Everything in between would be considered some degree of bisexuality. For simplicity's sake, I like to measure this by people's self-report of how they identify themselves. Sexual orientation could be measured by actual behaviors (who do you have sexual contact with?) or which gender are you sexually attracted to, but this gets tricky because of the aforementioned variability of both "sex" and "gender." For example, what if you're attracted to a transsexual male with a vagina and a very large clitoris that's almost porn-worthy? That's a behavior that would be hard to plot on a graph.

Sex drive (or libido if you prefer) is a little different. Like sexual orientation, it can fluctuate based on all sorts of variables like age, hormone levels, recency of last sexual contact, sexual stimulation, "hotness" of the potential partner, novelty, etc. Furthermore, male and female sex drive is affected by different variables. Because of this, I like to use self report, too. Some people have a very high sex drive (raises hand), while others have none (usually termed "asexuals".)

Like sex and gender, I fully support a Utopia where all the variations of sexual orientation and sex drive are fully accepted and supported so none of us have to live a lie. Here in the U.S., we've made incredible advances in gay rights, which has been awesome. However, we still stigmatize both ends of the sex drive continuum. "Sluts" and "frigid" (terms that I'm applying to all sexes) usually have a negative connotation. I want a world where that is no longer the case. I won't climb on my soapbox again; you get my point.

I want to take a moment to express my disdain for the pseudo-intellectual modern politically-correct butthurt movement. I'll simply say that if you're "fighting for equality" but dismissing anyone's opinion because of their demographic grouping, you are, by definition, engaging in the very behaviors you're supposedly rallying against.

There is absolutely no rationalization you can make, be it playing the victim, claiming oppression, or using any combination of "social justice buzzwords", that justifies the silencing of people trying to create a better world for all. I cannot count the times I've been called "entitled" even though the people making the claim have no fucking clue what hardships I've faced. Besides, are we really doing to only allow those that have suffered the most the right to fix shit? I'm pretty sure all the snobby "you can't have a voice because you're entitled" white class college-educated morons didn't grow up in abject poverty in post-Chavez Venezuela or war-torn Iraq.

Yes, I am white. I am a biological and genetic male. I identify with the masculine gender. I identify as straight. I like a lot of sex. None of those things invalidates the fact that I want to live in a world where all of us have equal opportunity, equal possibility, and equal responsibility.

Claiming to be "offended" or "insulted" by my thoughts on these matters will immediately earn my disdain, and likely a giant "FUCK YOU." At the ripe old age of 39, I'm too old to waste time with people that do not have enough open-mindedness to actually consider ideas without childish emotional reactions. I fully support your first amendment right to be a whiny little asshat, which means I earn the freedom to call you a hypocritical douche. And it also gives me the right to ignore you after I call you a douche.

The mentally-weak have no place in the planning and executing of a road map to a better world. If you're going to follow me, I welcome your input. Whining and bitching is not input. It's noise. Noise doesn't lead to action or change.

Posted by Alex Hamilton at 8:11 AM