I've received a few questions from the ladies about my post on Ladder Theory. Specifically, the male ladder. Even more specifically, "Why don't men have a Friend Ladder?" About half of the women that asked the question also inferred the answer:

Men don't have female friends if they're not sexually attracted to them.

It's really that simple. When I make this statement, most men nod and agree. Some of my beta male friends bitterly deny this, but of course, they're lying. They have to as their sexual strategy is based on the idea that they "befriend" women to get close to them with the hopes of eventually "making their move." That plan is in place the entire time, but revealing it would reveal the ulterior motive behind the deceit.

Anyway, that's the rule. I suspect there are a few ladies in my audience that don't believe me, so let's do a little female thought experiment (or, if you're brave, do it in real life.)

Ladies, imagine you're alone with your male friend and you won't be disturbed. You go into the bathroom, strip naked, then walk out, lie down in front of your male friend, and say "I need you to fuck me right here, right now." He will give one of two responses:

Which do you think he would choose? Every single male that answers this question for each of their female friends is going to answer this the exact same way. They're going to choose #2.

Guys befriend females for four reasons, and two provide the only exceptions to this otherwise iron-clad rule that guys will always want to fuck their female friends:
The first two rules are obvious and require no explanation.

The third rule is pretty self-explanatory. This occurs when the guy is MUCH higher value than the woman and he perceives that he has many far better, readily available options. In this scenario, the man would answer #1 to the sex test. And his penis would try to crawl into his body cavity. On the male ladder, this woman would be in his Abyss (Hilary.) 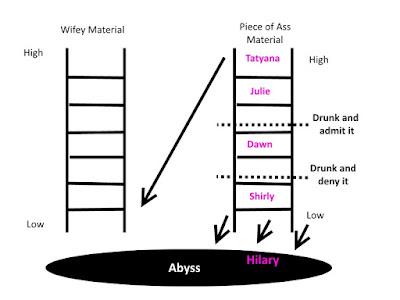 Even when really, really drunk, Hilary would be hard-pressed to escape the Abyss to occupy even the lowest rung of the ladder.

The other explanation for the third rule is the dude is gay. Not bi; gay. Like, a hard "5" or a "6" on the Kinsey scale gay.

The fourth rule is a little tricky and presents a dilemma of sorts. Dudes that are friends with the wives and girlfriends of their family members or males in their social circle would have sex with them if rule #3 didn't apply AND they wouldn't face the social consequences that would follow if they actually did. In this scenario, a dude's response to the sex test would probably be contingent on the importance of the relationship with the male. The more important the relationship, the more likely he'd answer with #1.

Does this concept mean all men are horny, deceptive jackasses? Of course not. It's just evolution. We're designed to be aroused by physical attractiveness. We're also designed to use a "shotgun" approach to reproduction. Our biological imperative that subconsciously drives our behavior causes us to want to fuck a lot of different women. We crave a degree of novelty (per the Coolidge Effect.) If a woman isn't in our Abyss, we'd fuck her given the right confluence of events. The only real thing that limits this is opportunity (they're not high value enough to actually attract a lot of women.)

I like talking about this topic in part because it tends to drive beta males insane with anger which tends to be wayyyyy past the line of "I disagree with this sentiment" rationality. And the reason *should* raise a major internal (and external) red flag.

Beta males will passionately deny they'd fuck their female friends (assuming the third rule from above) because their entire sexual selection strategy (how they find a mate) is predicated on the idea that they have to appear as asexual and nonthreatening as humanly possible. I talked about this extensively in my "Why women despise Nice Guys" post, my "Beta Males Explained" posts, and the stories of my own beta male experiences. Even suggesting they're hanging out in the friendzone for nefarious purposes cannot be tolerated, hence the irrationally-strong emotional response to the sentiment in this post.

When beta males place themselves in the friendzone by failing to make a good first impression, they think they're doing exactly what women really want. Unfortunately, they're wrong. As I mentioned in the "first impression" post, their methodology of appearing to be sexless eunuchs and assume feminine characteristics is almost the perfect storm to kill female desire. But they believe the exact opposite. That's why beta males become infuriated when an alpha male swoops in and "steals" their crush. They genuinely believe they've been putting in a tremendous amount of time and effort to "win" their girl "friend", and some random dude sweeps her off her feet by flexing his pecs making fun of her flowery shirt. That's what gives birth to the whole idea that "women love assholes", and also why beta males hate alpha males.

The saddest part of that dynamic is the tendency for the beta male, when he gets friendzoned for three years and sees his crush blowing the alpha dude in a bathroom stall at the bar despite just meeting him ten minutes earlier, tends to ease the extreme cognitive dissonance of his time and effort to "win the girl over" by assuming she's flawed and/or damaged. THAT is where a great deal of insanity-fueled misogyny comes from. When women say "let's just be friends", they mean just that, but not just in the present. Forever. The women, unfortunately, usually doesn't realize "let's just be friends" is playing right into the beta male's sexual strategy. She thinks she's making it clear he's going to the Friends Ladder. He thinks she just gave him the green light to begin his "I'm going to treat you like the princess you are" seduction.

A good rule of thumb for the ladies - assume all your male friends secretly want to bone you. Unless they're hot and you're not. Or they're really, really gay.

The Idea of "Plates"

Plate - noun - A female friend that a man keeps around for sex or the prospect of sex in the future.

There's a fascinating economic dynamic to this, however. When a male is monogamous, he'll almost always be "with" the highest value plate he believes he can attract. His "lower value" plates serve as backups of sorts if the relationship goes south. This tends to be a major source of female jealousy, and the higher the value of the plates, the more intense the jealousy. While it seems chaotic, this dymanic is one of the factors that actually leads to relationship stability. It assures the top "plate" isn't getting complacent in the relationship. If a dude is not monogamous, he will spin several plates at the same time (like the plate-spinning parlor trick, which is where the analogy originated.)

If a dude has a plate that is higher value than himself, she's no longer a plate. HE becomes one of her ORBITERS. See how that works?

In the next post, I'll talk about how females view male friends, which should be very helpful for the dudes. Ladies? It's shit you already know. ;-)