I've gotten a few questions from both men and women regarding female attractiveness. In my last post about Ladder Theory, I discussed what men look for in a woman and shared this graph: 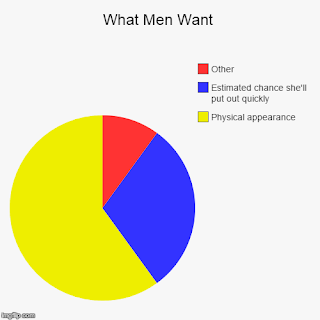 The vast majority of what attracts us to females is based on their physical appearance and their willingness to have sex. That "other" category, which constitutes about 10% of a female's attractiveness, is almost always personality characteristics like confidence, agreeableness, self-sacrificing, willingness to show appreciation, and, of all things, mild neuroticism (interestingly, all of these are backed by empirical research.) This 10% could also include "kinks" or fetishes that specific guys may like, such as hair color, height, or an eye patch.

Status. And money. And power.

Basically, all of the "provisioning" things related to what females find attractive in males (per hypergamy) do not apply in reverse. While there may be some dudes that find it attractive (like freeloaders and con artists), this is not universal. The exceptions to this rule were explained in my "Ronda Rousey Fear Boner" post from a few weeks ago.

Normally this is a complete non-issue except for the folks that promote the idea that women can "have it all" (meaning a career and a family.) The fantasy is that women can spend their 20's and most of their 30's building a career, then find a fabulous mate, settle down, and start a family in their late 30's before their biological clock runs out. A major part of that fantasy is the belief that a woman's sexual market value (SMV; her ability to attract a mate) is directly tied to youth. Youth equates to fertility and is perceived as "beauty."

The proponents of the "you can have it all" trope sell the idea based on the mistaken belief that the loss of SMV value due to declining attractiveness from 23 to 35 can be compensated for with the status, power, and wealth that comes from her career. That's simply not true. Unfortunately, many women put off a family until much later in life, then realize their ability to attract a quality mate has decreased dramatically from their college years. They expect they'll have a choice of a Lexus, Cadillac, BMW, or Mercedes. In reality, they'll get a choice of a beat-up old Buick, Saturn, Kia, or a Vaclav. 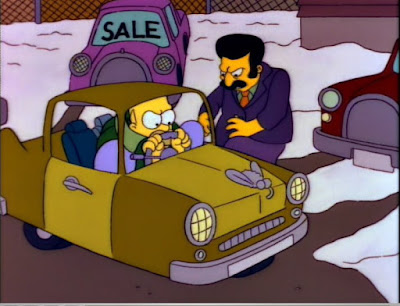 Throughout my life, I've known several women that did just this. When they decided it was time to settle down, they were shocked to find "all the good men" were either taken or marrying women in their mid-twenties. In every case, they ended up marrying a low-value beta male, then did the whole "21st Century Marriage" cycle and personally suffered a lot as a result.

Note - I am not suggesting women should not pursue careers. Quite the opposite. But it's very disingenuous to tell women their decision to put off a family doesn't come at a serious cost, and that cost is a loss of SMV. If a woman is cool with that (many are), then great! But it is a variable that needs to be taken into consideration when mapping out your life plan.

I know a lot of you are thinking "But that's not fair; we need gender equality!" If we measure fairness (and gender equality) as "we all need to be the exact same", then yes, this is horribly unfair. The problem - we're not going to be able to change that. What we find attractive is driven by evolution and a biological imperative we can't rationalize away. For both men and women, we can't say "this person you don't find attractive really IS attractive" and expect their primal preferences to simply disappear. Expecting that to happen would basically be like telling a gay male to be straight and he'd suddenly be attracted to females or a transgender male to just start perceiving themselves as a female. It's also like telling a person suffering from major depression to "just cheer up" and expecting their symptoms to disappear. Our brains simply don't work like that.

Hell, even the people that adamantly deny that physical appearance doesn't matter, when brought into a lab and hooked up to a machine that will measure arousal, including a penile plethysmograph, vaginal photoplethysmography, thermography, Doppler ultrasound, and PET scans and fMRI on genitals and the brain), will show a stronger arousal response to attractive people versus unattractive people. We MIGHT be able to alter that response a little bit if we put people through the equivalent of "conversion therapy", but using that to change who we're attracted to seems as ridiculous and unethical as trying to do the same to homosexuals.

Given we can't change attraction on an individual level (let alone a societal level), complaining about it being "unfair" and chalking it up to "gender inequality" is silly. We're bitching about a problem that can't be solved, which is a waste of time and emotional angst. It makes a lot more sense to educate people (ala this very blog post) so they can make informed decisions and consider what constitutes "gender equality." Besides, us males have our own version of this. Like the woman that expects power, status, and wealth to increase her value, beta males that expect emotional neediness, vulnerability, a "dadbod", and no desire for self-improvement fall into the same trap. They've been told something will increase their value, when in fact it does not.

Me? I prefer to define gender equality in a way that accounts for biology, which includes the behaviors and preferences we cannot control. To me, gender equality is the same thing I promote for any demographic designation (race, religion, height, disability, national origin, age... whatever):

Equality means all of us have equal opportunity, equal possibility, and equal responsibility.

Nothing more; nothing less.

Posted by Alex Hamilton at 6:24 AM